MP Zaake on why he nearly exchanged blows with Tibuhaburwa 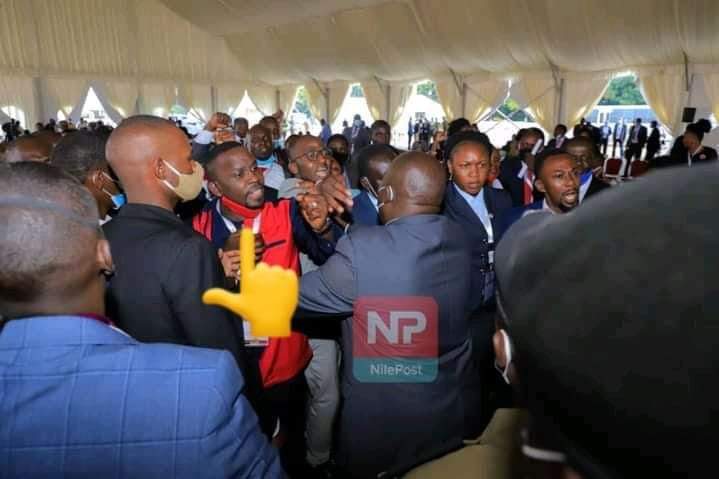 The Mityana municipality legislator Zaake Francis Butebi has given his account on why he nearly pounced on Gen. Museveni during the Monday polls for speaker. The furious youthful firebrand NUP MP was the talk of the day right from the time he arrived for the voting. Zaake was commended for his bravery by dressing in an inciteful way. The legislator was in a red suit with an inner white shirt inscribed with photos of all detained NUP political prisoners.

Zaake’s unique appearance compelled NBS journalist, Canary Mugume (state leaning pressman) to engage him for an interview. Canary asked Zaake for his legislative agenda and in response the 29 year old MP told him his agenda was to see the 77 year old Museveni cry. Indeed, Zaake nearly reached his ambition at the climax point of the voting.

Zaake majestically rose from his seat and faced off with Gen. Museveni. He shouted at him and urged him to free all political prisoners and also leave the presidential seat which he argues was won by Hon. Kyagulanyi Ssentamu Robert aka Bobi Wine. It had to take the intervention of the plain clothed SFC to restrain Hon. Zaake from approaching the fearful Museveni. “Your worship the Chief Justice, someone is spreading covid,” Museveni sobbed as he cries to security to restrain Zaake.

Zaake on why he attacked M7

NRM MPs were all over the house ‘celebrating’ Hon. Olanya’s victory as the next Speaker of the House. I thought that since they had been allowed to express their pleasure, I could equally express my displeasure at Gen. Museveni for rigging the election;and for innocently imprisoning our comrades.

The SFC, who had illegally gained access into the precincts of Parliament, attacked me at the exact time when I was demanding that Gen. Museveni #FreeAllPoliticalPrisoners. I know he got the message. It won’t be business as usual in the 11th Parliament. #BringBackOurPeople #WeAreRemovingaDictator