Oulanyah commends FDC over role played in his win 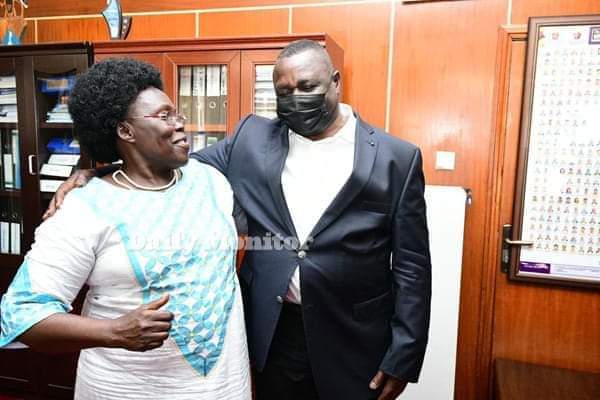 The newly elected speaker of the eleventh parliament, Rt. Hon. Jacob Oulanyah has today paid a courtesy visit to the outgoing Leader of opposition, Betty Aol Ochan of the Forum for Democratic Change. The visit was a gesture to appreciate the FDC party for the covert role it played when its MPs teamed up with NRM to frustrate the return of the outgoing Rebecca Kadaga whom they suspected to be the NUP party candidate.

Oulanyah defeated Kadaga with 310 votes against her 197 while the official FDC candidate Ssemujju Nganda garnered only 15 of the 32 FDC MPs votes of which even his own nomination was by the NUP MP for Makindye West Allan Ssewanyana.

In the closed door talks which happened at parliament, Aol Ochan and Oulanyah held conversations regarding the future of the FDC in the eleventh parliament. In fact sources privy to these discussions intimate that Oulanyah and the FDC party are to implement their Memorandum of Understanding effective the next sitting of parliament. Part of the FDC-Oulanyah agreement was that the former opposition front gets enough plenary time for its legislators. In the same vein, all plans of NUP under the leadership of the minority are to be sabotaged by both FDC and NRM. FDC vowed not to cooperate with NUP LOP office as part of the deal they had with Oulanyah.