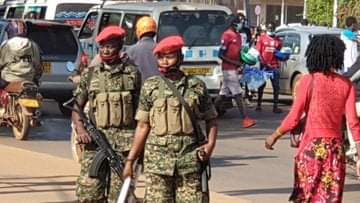 Renowned NRM mobilizer in Gomba district is reportedly behind the incident captured in a social media film showing military officers embroiled in an offensive with civilians. The NRM stooge has since been identified as Yiga Wamala alias Kissa kya Mukama who is a vibrant NRM party leader in Gomba district.

In the incident, a military officer armed with a rifle is seen making several attempts to open fire at a rebellious plain clothed civilian who tries to fight to save his own life. The soldier is afterwards overwhelmed by events as a crowd emerges with mobile phones and starts taking footage.

One of the women shouting in the video spoke to this reporter and prayed not to he mentioned says at the time of the scuffle, she was travelling with her husband who is a serving police officer in the Criminal Investigations Department.

She says the bully NRM mobilizer afterwards tried to block their path by putting his vehicle in front of theirs. “We were heading to the funeral when that shameless man deliberately tried to block us from proceeding our way,” she remarks.

“We dodged him and he kept trailing us till he successfully blocked our path and emerged from the car armed with a machete and a gun. We asked him to explain why he wanted to kill us but he kept stammering and accused us of undermining his authority,” she added.

Yiga is said to have charged at the rebellious occupants of the car and tried to confiscate their keys. “He came and tried to grab our car keys,” says the woman.