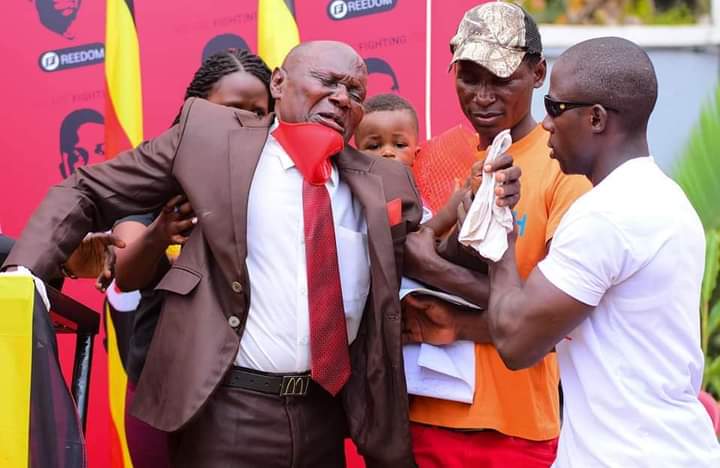 Renowned elderly citizen, Omulangira Fredrick Kateregga who routinely featured in media interviews castigating the Museveni regime for its prolonged detention of the political prisoners has today been laid to rest.

In his deliberations, Bobi called on parents to emulate the deceased Kateregga who always spoke out and condembed every form of injustice. “I know most parents instead discourage their children from taking part in the struggle for liberation but Mzee Kateregga was one of a kind,” Bobi exclaimed. “Even us we are ordinary. We were born by men and women like the rest of you,” he added.

Hon. Kyagulanyi says parents should instead encourage their children to persist on with the struggle other than discourage them. “When we were starting this struggle, we hardly knew that we would get this far. I call on you to be brave and courageous. Speak out and fight injustice. These people (Museveni and his clique) found us in our motherland. Our parents fed them, housed them and gave them refuge,” he added.

His colleague, Hon. Zaake also commended the fallen 80 year old deceased. “Mzee did not fear to speak whenever need arouse,” he said.

His son, known as Pympah who has just returned from Kitalya after 6 months on remand says he will not forget the times he had with his fallen father. “Dad always checked on me in Kitalya. He always called and encouraged me to soldier on with the struggle. He told me not to forsake Bobi Wine,” he said. “He would always bring me some books to Kitalya so I could read while in custody. At one point, he successfully smuggled a shs 20,000 note for my up keep,” he added.

Mzee Kateregga, a former physician was laid to rest by hordes of mourners who all commended him for his extraordinary courage.