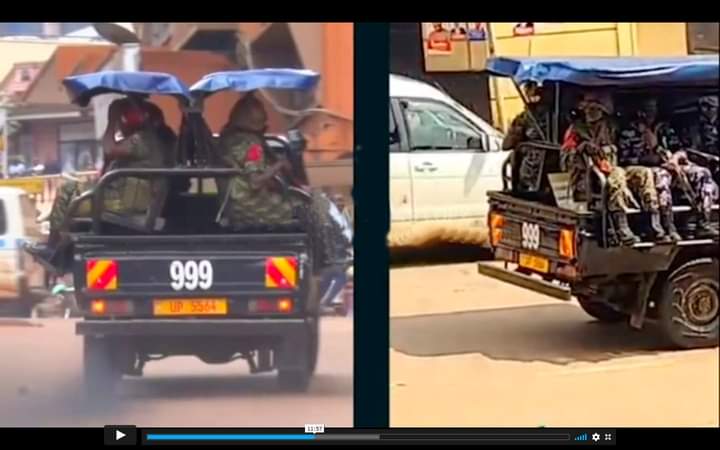 The police and military commandos implicated in the killing spree that manifested in the November 2020 protests have fled into hiding following exposure in a BBC Documentary released on May 31, this site has learnt.

SEE ALSO: I would expect clerics to make a probe into the November killings-Bobi Wine

The said military and police officers were part of the crew that used police patrol 17 registration number UP 5564. In the BBC Africa Eye investigation footage titled, ‘Three Killings in Kampala’, the implicated officers are seen shooting recklessly with impunity on the street of Kampala road. The officers sitting on the left side of the police patrol vehicle were the prime suspects in the shootings at Kampala road that saw their killing spree live over 7 people including unarmed women, children and a pensioner dead.

The police and military officers whose faces are still blurry when the footage is zoomed have been identified by their seniors according to our reliable sources in security. “They have been known. Everyone who was in operations that day is known,” our source says. “They have however been asked to first take a leave and be out of the media spotlight,” the source adds. The same source reveals that these officers are on the run already following the release of the documentary. “They have fled already. We don’t see them in the barracks,” our security source says though the acclaim remains unverified.

The deadly November protests left over 54 lives lost following clashes between security forces and peaceful protesters challenging the brutal arrest of NUP presidential candidate Kyagulanyi Ssentamu Robert aka Bobi Wine, a popstar challenging Museveni overstay. With over 5 months since the killings ensued, families remain in untold agony as majority have never been compensated as pledged by Gen. Museveni in his post-violence remarks. The controversial 77 year old bush war guerrilla leader instead sang praises for his soldiers who spearheaded the crackdown on protesters whom he named ‘terrorists’.