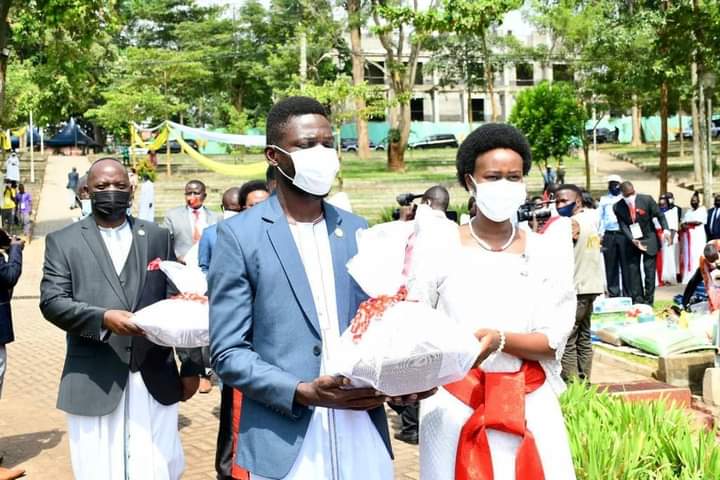 The National Unity Platform party president also former presidential candidate Kyagulanyi Ssentamu Robert aka Bobi Wine today was among the selected 200 people that attended a special mass at Namugongo martyrs shrine in commemoration of the Uganda martyrs who were persecuted by King Mwanga I at the peak of the religious wars in the 1880’s.

Hon. Kyagulanyi was accompanied by his wife, Barbara Ithungo and the eleventh parliament Leader of opposition, Mathias Mpuuga Nsamba.

This is the second public appearance made by the opposition leader with his preceding being at the residence of UPDF general, Katumba Wamala who escaped an assassination attempt a couple of days ago.

A composed calm Bobi Wine attentively prayed at the Catholic side of the shrine and at the closure of service left calmly without addressing the media as earlier anticipated. Hon. Kyagulanyi now grapples with strengthening the entrenchment of his party and put to account all leaders that were voted by the masses. Kyagulanyi remains an icon for the oppressed plight who look to him as a beacon of hope and a conduit of the long desired political change in Uganda. The 39 year old pop star remains the most celebrated person in Uganda having inspired an entire generation into joining politics. Wine was only 4 years at the time when president Museveni took power in 1986. Statistics also show that three quarters of the population was not yet born at the time when Gen. Museveni, a guerrilla leader took power in January, 1986.