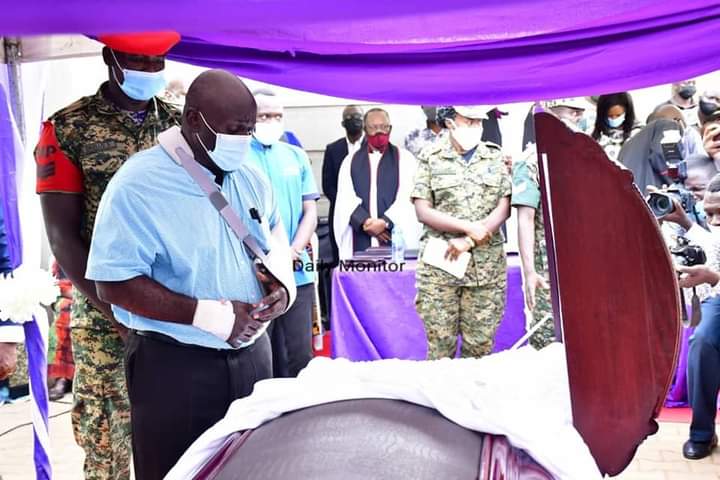 The former Minister for works and transport, Gen. Edward Katumba Wamala who just skipped an assassination attempt has been asked to abandon his renowned route chart. The adjustment is one of the security measures adopted to ensure that the four star general is put out of total danger.

SEE ALSO: ‘I will make them pay,’ Museveni on Katumba shooters

“We have asked him to refrain from using the Kisasi route,” one of the members of the police forensics team says. “I’m also sure he shall have a lead car and at least 12 armed UPDF guards. As a top serving army official, he is entitled to all that security,” adds the source.

Gen. Katumba’s daughter who perished in the attack, a one Brenda Nantongo Wamala is to be laid to rest today in her bridal gown. The 26 year old physician who took the bullets meant for his father is said to have been in preparations for her wedding before meeting her untimely death. In his eulogy, Gen. Katumba revealed his personal attachment to his deceased daughter. “She was the only one who understood me,” the bereaved General told mourners yesterday during a vigil at his home in Kisaasi. “She would ask me about my health. Daddy have you taken your medication? Have you eaten yet? I’m too saddened that she had to die in such a way,” he added.

Meanwhile, our sources have disclosed that the CCTV surveillance team at Kiira road police division has been roughed up and arrested for negligence. The investigators discovered that most of the CCTV surveillance cameras were dysfunctional at the time of the shootings which gave the assailants liberty to pursue their target and flee successfully without trace. The same security source also says one of the people privy to the attacks has been arrested. “We have arrested one suspect who knew about the plan,” says the CID. “He is under our interrogation. I can’t say more than that because I’m not authorized to speak. It may even compromise the investigations,” he adds.