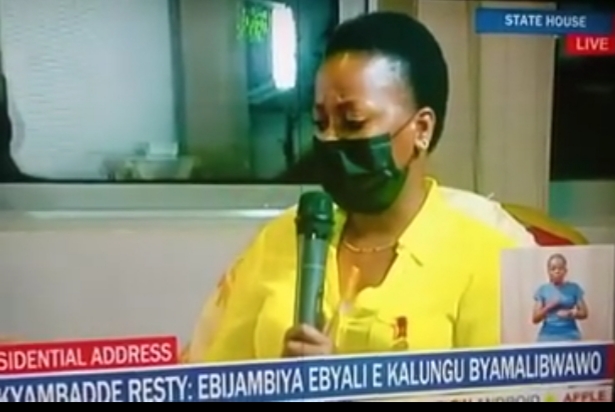 Ugandans have taken to social media to ridicule president Yoweri Museveni following his presentation of a false victim of the deadly Kalungu machete wielding bandits led by a one notorious criminal known as Kiddawalime.

In the testimony featured during the televised address on covid, the said victim who disguises as a nurse recounts her deadly encounter with the Kiddawalime group which is said to have raided her home on the New Year’s eve of 2018. The woman who disguises the character and names of the real victim postures as Nakyambadde and narrates her ordeal. “When the men broke into my house, I rang my immediate neighbours who alerted the area police,” recounted the imposter. “Police took long to respond but at least they turned up. At the time, my attacker (Kiddawalime) had told me to undress so that he rapes me,” she added.

She however claims that the criminal was ironically merciful enough to grant her time to at least wash her feet. “He told me to undress and I told him I’m unclean and I needed to refresh. He agreed and told me to turn before he took my pictures with his phone. That’s when police emerged and started firing bullets,” she claims.

Just as case was with the Boda Boda cyclist saga in the Gen. Katumba shooting saga where one masqueraded to have rescued the general till the real good Samaritan surfaced, it has turned out that the woman paraded by Museveni was a false identity and a total imposter. Ugandans have replicated media stories of the real victim of the Kalungu machete attack. It turns out that the president dealt with the wrong person. No wonder he even went on to brag about how he elevated her status and incorporated her into the nursing department of the Special Forces Command.