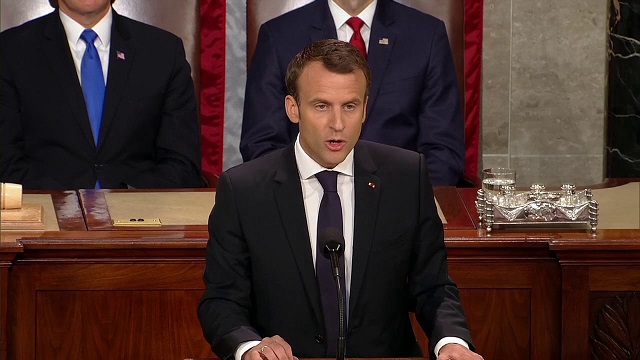 French President Emmanuel Macron was slapped in the face during a visit to southern France before he was quickly pulled away unharmed by his bodyguards.

In a video posted online, a man wearing a standard Covid facemask exchanges a few words with Macron as the president approaches the crowd during a visit in the town of Tain L’Hermitage. As Macron grips his arm, the man hits the head of state on his left cheek before being controlled by the presidential security detail.

“A man indeed tried to hit the president. We have no further comment at that stage,” a spokesman for the French presidency said in a message to reporters. “The discussions with the crowd and the hand shaking went on. The trip goes on,” he said. Two people were arrested, Agence France-Presse reported, citing local authorities. Both are 28 years old and have no criminal record, according to BFMTV network.

Prime Minister Jean Castex was given a standing ovation at the start of government questions in the National Assembly in Paris when he condemned the attack.

“Through the head of state, it is quite simply democracy that is targeted,” Castex said. “Democracy is about debate, dialogue, competing ideas, the expression of legitimate disagreement. But it can never be about violence.”
Macron’s top political rival, far-right leader Marine Le Pen, called the attack “unacceptable.”
Earlier in the visit, Macron had urged “everybody to calm down” amid rising political tensions with the presidential election less than a year away