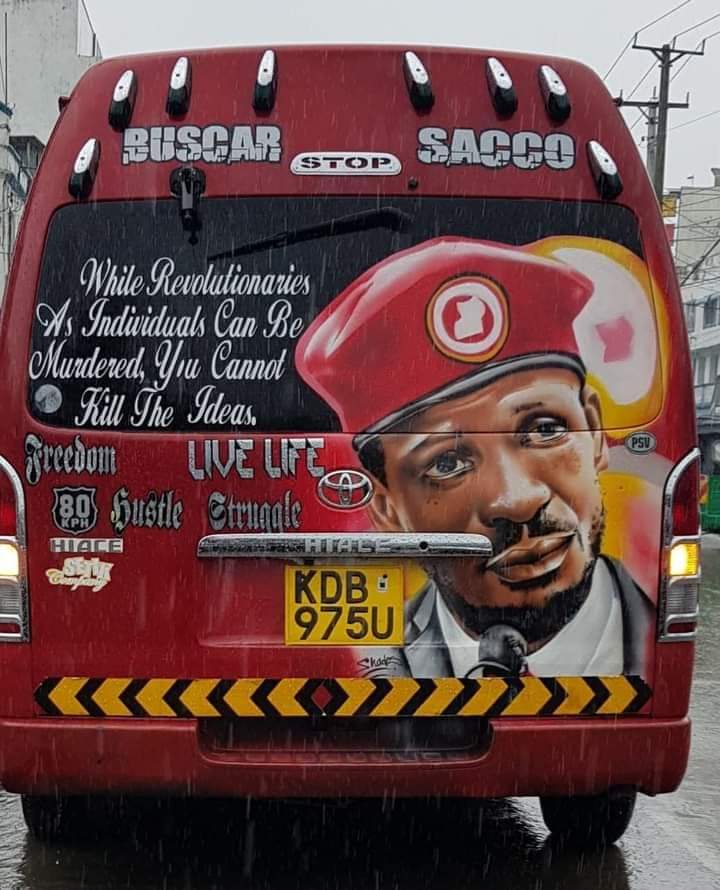 The photos of former presidential candidate Kyagulanyi Ssentamu Robert aka Bobi Wine have become the talk of residents of Nairobi, the capital of Kenya. The youthful generational leader is appreciated for being one of the most inspirational icons on the African continent. It is now impossible to move 5 steps on the Kenyan streets of Nairobi without encountering a taxi locally known as Matatu bearing gigantic images of the Ugandan political icon named Bobi Wine. Kenyan matatu operators say they paint their vehicles to honour Bobi’s contribution to Uganda’s liberation cause. “He inspires me a lot. It’s unimaginable for any celebrity to abandon his or her flamboyant life to lead a cause of liberation,” Odhiambo, a taxi driver at Koinange street, Nairobi says. “To me he is more than just an inspiration. Bobi Wine is a blessing to not only Uganda but East Africa at large. Karibu Kenya!,” he adds.

SEE ALSO: Bobi Wine speaks out on URA return of his armoured vehicle

At just 39 years, Wine who is a music star turned politician, has featured on a series of magazines, won accolades and ranked among the top 100 most influential on the continent. In the previous Forbes Magazine rankings, Wine was pronounced the richest musician in East Africa. Wine owns a chain of assets but prefers to maintain a humble character, courtesy of his ghetto roots.

Bobi Wine is credited for inspiring his generation into challenging Gen. Yoweri  Museveni who happens to be one of Africa’s last standing dictators. He says he won the just concluded general elections with 54.19% of the total votes though the Electoral Commission constituted by president Museveni declared the contrary. The EC announced Museveni winner with 58% against Wine’s 35%. Since his entry to politics, Wine has endured all sorts of humiliations imposed by the Ugandan junta.