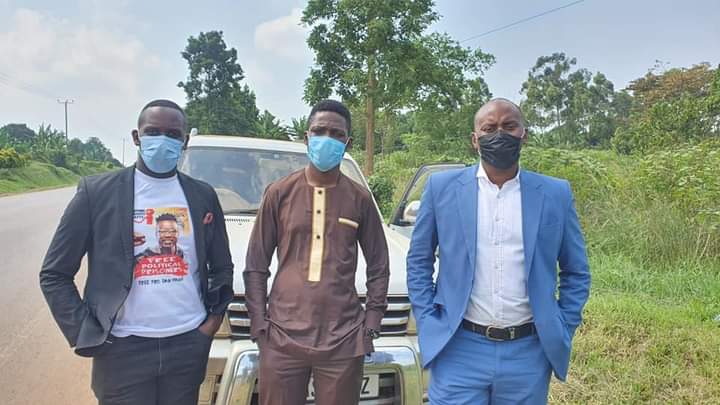 Kibalama is the one who transacted the transition of the NURP that later morphed to NUP last year. He is said to be battling diabetes at the moment which has struck him down to the sick bed. Bobi and other NUP leaders like Joel Ssenyonyi and David Lewis Rubongoya today visited Bombo military barracks where Kibalama is getting medication.

We just returned from Bombo Military Hospital where we had gone to check on Mzee Moses Kibalama Nkonge, the founding President NURDP, later NUP.
Mzee Kibalama has not been feeling well for the past weeks and we have been in touch with the family over his health. Last night, his condition worsened and he was rushed to the military hospital. Unfortunately since his arrival there, he has not been attended to. The situation there is the same as in all other government hospitals!

We got to the gate and were allowed to access the barracks like all visitors. When we got to the entrance into the hospital and they realised it was us, there was panic all over. They said they had to make consultations up to the level of CDF before we are allowed to check on a patient, yet all other visitors were freely walking in and out to see patients. Before we even left the barracks, we watched as the soldiers who were manning the gates were all arrested. Their seniors were asking them how on earth they failed to detect us and allowed us into the middle of a barracks! This environment of fear within the forces for doing the right thing will be eventually defeated when the people eventually win. We shall continue to support Mzee’s family and we continue to pray that he recovers soon. Given his state and the current circumstances in hospitals, we’ve requested the family and his personal physician to advise on the feasibility of transferring him to a better health facility.