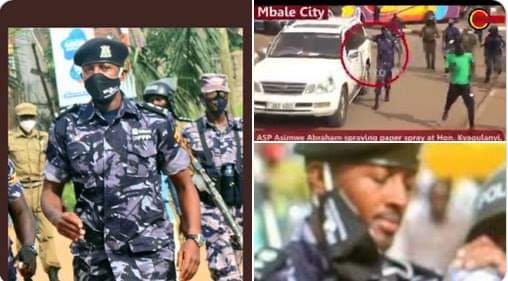 In our usual Friday series, we proceed with the exposure of some of the men in uniform whose recklessness will forever be remembered by the public. As the political dust settles with several elected leaders from different political denominations taking oath to serve in their respective offices, there are Ugandans who still wail the loss of the lives of their loved ones who died in one of Uganda’s deadliest election campaign ever. In today’s episode, we unveil ASP Abraham Asiimwe who prefers to be called ‘the Terminator’ among his peers in uniform. He purports to be a member of the Field Force Unit of the Uganda Police Force despite getting training of the Special Forces Command, an elite presidential guard.

Police boss who attempted to assassinate Bobi in Mbale identified

Asiimwe was crowned at the rank of Assistant Superintendent of Police on February, 4, 2016 by the former police chief, Gen. Edward Kale Kayihura who recognized him for his remarkable works in the illegal repatriation of Rwandese refugees. Asiimwe has been severely deployed in a series of ‘search and destroy’ missions since the 2016 general elections where he tormented former presidential candidate Rtd.col.Dr Kizza Besigye and his supporters. He deployed the same vigour in the just concluded general elections where he pepper sprayed the NUP party presidential candidate Kyagulanyi Ssentamu Robert aka Bobi Wine and FDC’s Eng. Patrick Amuriat Oboi when they showed up in Mbale to campaign.

Asiimwe is a married man and his wedding which occured last year attracted the former speaker of parliament Rt. Hon. Rebecca Kadaga who attended the function. He is not a native Ugandan as his roots are traceable in Rwanda. “Actually this guy Asiimwe is from Mbarara and his father is called Rutahigwa, a Rwandese national related to ex security Minister, Gen. Elly Tumwiine,” says a source close to ASP Abraham Asiimwe.