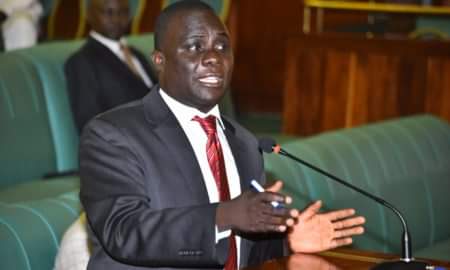 The flamboyant NUP MP representing the people of Butambala in the 11th Parliament is set to become the Buganda caucas chairperson outshinning Nambooze .
In the wake of the rise of the NUP numerous MPs from Buganda and former DP stalwarts joined Kyagulanyi Sentamu and resultantly the NUP.
Medard Ssegona , Mathius Mpuuga and Muwanga Kivumbi were some of the big shots that trusted Kyagulanyi earlier than any others.

He has been an ardent Buganda Youth who has worked for the Pride and the existence of the Institution’s Popularity and respect.

Muwanga has been a vanguard in the demand of the over 200b shillings the Kingdom owes the central government .

The Butambala Legislator boosts a huge support from most of senior comrades in the struggle for his personality (Mpuuga , Ssegona , Ssemujju among others .).This means that Nambooze ‘ s Personality has deprived her of former allies .(She may have been involved in petty fronts with many including once ever attacking the people power movement and forsaking Dr Besigye whom he deputized and footed her medical bills .
This could have been seen as treachery !

It was deliberate for KIVUMBI to miss out on the appointment Committees such that he can galvanise the NUP members (Most of whom are First timers ).This justifies why Nambooze was appointed Chairperson of Governments Assurances .

For the last 15 years Nambooze has been in the Buganda Caucas leadership Deputizing Kiwanda SUUBI but the Caucas has lost Vibrancy and steam .Her credibility on the caucas therefore is highly doubted and Consequently Muwanga is seen as a possible Alternative .

At this critical time , Buganda as a region needs a leader whose working relationship may build a good Rapport with the region leaders and the the Buganda Establishment .
Nambooze has had numerous fronts with the Kingdom .
(The Baganda have a saying ” Nnanyini Kiggwa Yakiwebuula ) which literally stands for ; A person who belongs to some where respects its norms and Values.
This may be lacking forNambooze .

The People who have been following already know that Muwanga’s Loyality to NUP and the NUP president is unshaken .He is a key stake holder in the NUP.

The shadow government Position he may get needs a backing of the NUP and other MPs from Buganda to mandate him with heading the Buganda Caucas in the Parliament of Uganda .

Looking at the other side of the Coin , Nambooze is headed for humiliation .This is due to a number of factors most of which are her own creation .
The Mityana Lord Councillors’ facilitation angered many NUP and Kyagulanyi close associates , her association with NUP MPs is not convincing , her senior friends don’t back her project .
Infact she may want to create a Kadaga -Oulanya Scene !