Eddie Mutwe, Nubian and other NUP members get bail 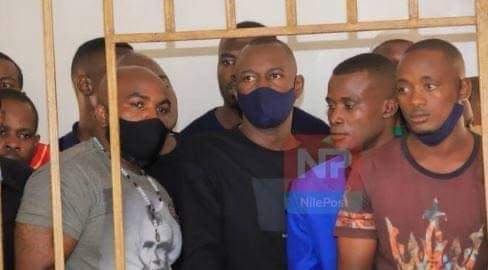 The general court martial in Makindye has this Monday afternoon rubber stamped the bail application of the remaining batch of the National Unity Platform party supporters who have languished in Kitalya prison for the past 6 months.

Among those released was renowned singer Buken Ali aka Nubian Li, Daniel Oyerwot alias Dan Magic, Edward Ssebuufu alias Eddie Mutwe and the rest of the team that was seized by the military in Kalangala as Bobi Wine went for a campaign rally for his presidential bid.

NUP lawyer, Anthony Wameli and secretary general David Lewis Rubongoya say this is what the court martial boss Lt. Gen Andrew Gutti would have done months ago but he chose to defer the trial till his senior, Gen. Museveni probably urged him to free them as the post-election tension settles. Nubian Li, a singing partner to Bobi Wine was accused alongside others with possession of military stores, a capital offence equal to treason. Surprisingly, the accused allegedly committed the offence at the time when they were under incarceration at Masaka central police station.