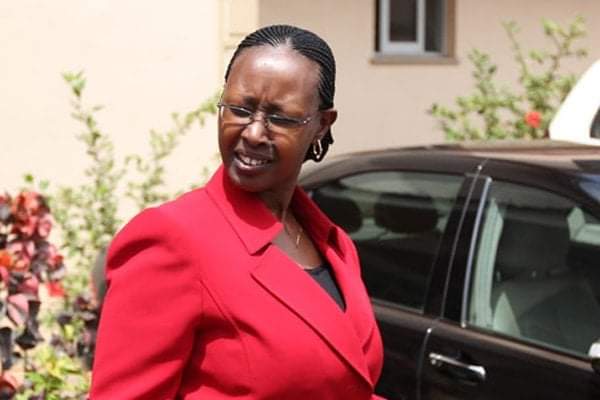 On Thursday as the vetting of new cabinet Ministers was being concluded, Minister designate for Luweero triangle, Alice Kaboyo nearly fainted after the committee members unanimously rejected her ministerial appointment on grounds that she admitted that she mismanaged public funds. Kaboyo in the year 2006 connived with Health Minister, Jim Muhwezi and state health Minister Mike Mukula and stole over 280 billion shillings meant for the Global Alliance for Vaccines and Immunization.

Deapite her pleas for a pardon, only 2 committee members voted in favour of her appointment, 2 abstained while 20 rejected the appointment. Kaboyo says she accepted the charges after legal advice from her lawyer. “I was misled by my lawyer who urged me to accept the counts and be served with a light sentence,” Kaboyo told the vetting committee. “I did not commit the offence. I only pleaded guilty to save court’s time,” she begged.

In the year 2012 during her trial over the mismanagement of GAVI funds, Alice Kaboyo pleaded to 4 counts including forgery of a signature of the then permanent secretary, Amelia Kyambadde. Upon accepting the offence, the anti corruption court fined Kaboyo only UGX 20 million out of the billions they laundered. The scandal which took place nearly a decade ago has haunted the minister designate. However, her accomplice, Jim Muhwezi was confirmed by the same committee, something that has raised eyebrows of the public. People wonder how Muhwezi, the security minister designate successfully went through the same committee that has turned down Kaboyo’s appointment.