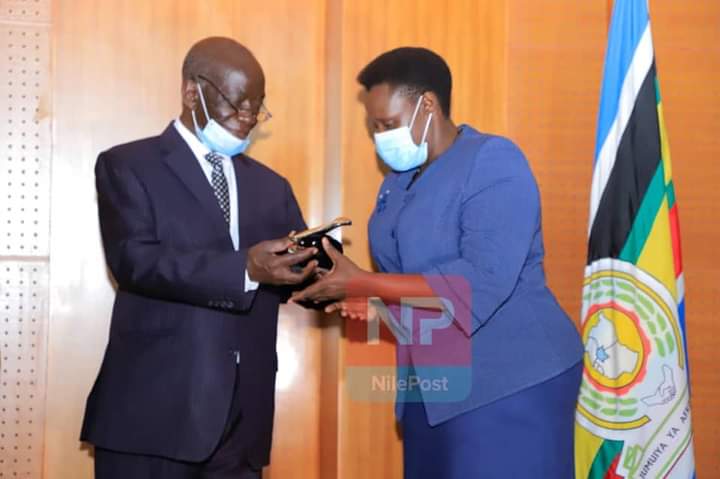 The outgoing Vice president, H.E Edward Kiwanuka Ssekandi has today officially handed over the office of the vice president to his successor, Rtd. Maj. Jessica Alupo.

Alupo sang praises to her predecessor whom she appreciates as a distinguished committed serviceman that patriotically served his country.

“Our outgoing VP H.E Ssekandi has ably served without errors. You have been such a wonderful Vice President for the last 10 years and I look forward to consulting you from the time to both digitally and physically, ” Alupo said. “I pray for your continued good health because this country still needs your wisdom and experience that has accumulated over the years of your service as Deputy speaker, speaker and VP,” she added.

Alupo, a daughter to an NRA historical pledges to passionately serve her boss, Gen. Yoweri Museveni. “We shall fulfill our role in serving the president of the country,” she says.

Ssekandi is one of the Ministers that were trounced by the National Unity Platform party wave in the concluded general elections. The former ‘Law Development Centre’ principal was recruited by Museveni in a bid to neutralize the rage of the Baganda and Catholics who felt sidelined in the body politic. Ssekandi has been the Bukoto central legislator for the past 2 decades. He has served in different capacities as Deputy speaker, speaker and Vice president before he was forced to throw the towel after voters opted for a fresh face to represent them in the eleventh parliament. Ssekandi leaves behind a legacy as the most docile Vice president to ever exist in Uganda.