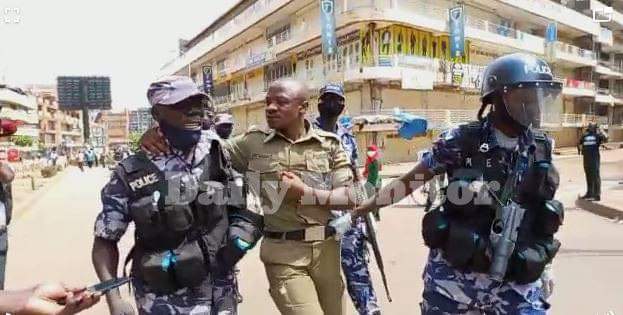 A newly released documentary by the state owned broadcaster dubbed Uganda Broadcasting Corporation in its seasonal series of the ‘UBC Eye’ has relieved the accused junior police officer, Turyasingura of the charges trumped on him.

SEE ALSO: Police arrests two of its own over shunning face masks

On June 21 at the peak of the enforcement of the presidential directives on covid, the nation watched with shock as police officers of the Field Force Unit swarmed on their own and clobbered him to pulp. The FFU police crew under the command of a one Nsiimenta mercilessly attacked their own officer accusing him of hiding people in one of the city arcades. The officers claimed that Turyasingura wanted to open fire at their commander, something this documentary shows as a contrary. It turns out that the accused officer did not actually aim at his senior as alleged and indeed CCTV surveillance cameras on the building are available to back this up. The reality in this documentary is that Nsiimenta and her crew unleashed their anger on the innocent officer simply because he did not want to join their operation as he was deployed to guard a supermarket in the downtown Kampala central business district. In this same investigative piece, it is established that the bullet in Turyasingura’s rifle was not even in chamber as alleged by his arresting officers. Below is the entire clip that exonerates the officer who has since languished in detention at the cells of Central Police Station as snail paced investigations by CID ensue.