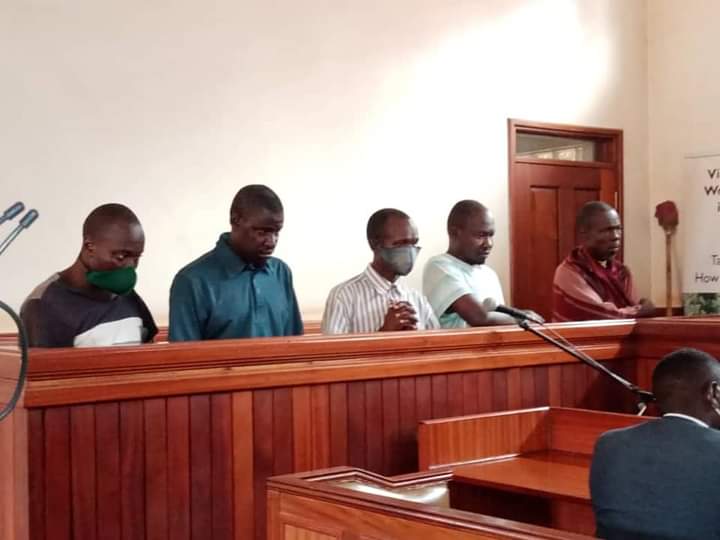 The National Unity Platform party president Kyagulanyi Ssentamu Robert aka Bobi Wine has lashed out at security forces for applying excessive force on the recently arrested suspects in the Gen. Katumba Wamala shooting. Hon. Kyagulanyi’s comment comes moments after the suspects were on Thursday arraigned before court under very deep pain as they profusely bled due to torture. The bodies of the suspects bore marks of whips and fresh wounds to demonstrate the torture they have been subjected to while under state custody.

Hon. Kyagulanyi published a post on his Facebook page decrying the undeserved punishment imposed on the suspects by their captors.

These are images of Ugandans who were arrested by security forces two weeks back and detained in unknown places. They were accused of being behind the attack on Gen. Katumba Wamala a few weeks back. Five of these people (numbers 4 to 8 on this charge sheet) were apparently killed ‘during investigations.’

Following attempts by lawyers to have them produced in court, they were brought before a magistrate in Nakawa today. This is how they appeared! They told court how they were severely tortured, while their tormentors demanded that they confess to have attacked Gen. Katumba! What sort of nonsense is this?

Our Constitution and other international laws to which Uganda is a signatory condemn torture under any and all circumstances. It is criminal to extract information from suspects through torture. Dictator Museveni and his regime of blood have specialised in torturing citizens with impunity, each day going from bad to worse. What is more unfortunate is that many countries in the world continue to hobnob with such a brutal regime and give them money, most of which they steal and use to buy equipment which they use to torture and kill our people.

It is the duty of every Ugandan to say ENOUGH. Unfortunately many people have tended to think they are safe, until their loved one or they themselves are taken through these horrendous ordeals. We must also continue to demand that nations and institutions which continue to support the illegitimate regime in Kampala stop. We have told them and we continue to tell them to stop funding our oppression.