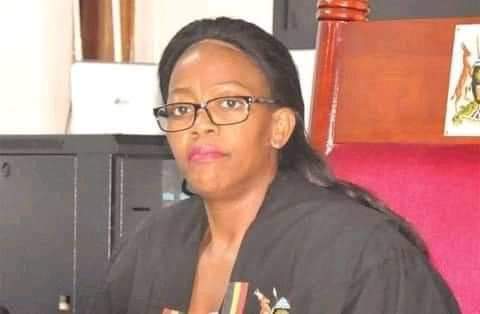 Uganda Police say they have kick started investigations into circumstances under which Buganda road magistrate Gladys Kamasanyu was thumped in broad daylight by yet to be known assailants on the Saturday afternoon.

According to police, the judge was battered by unknown thugs who made off with her valuables. “She was beaten up by thugs just as she reached the gate of Green hill Academy where she had gone to collect PLE results for her child,” Owoyesigire said. “At the time of her clobbering, nobody could respond instantly save for the school guards who arrived when the thugs had made off with her valuables. Our area police responded after 3 hours. But we are investigating the incident and we hope to apprehend all the culprits,” he assured.

‘Was she attacked for her reckless partisan conduct in the courtroom?,’ is the question lingering on the thoughts of several activists who’ve been through her dock. Many say she has been insensitive in her judgements. Ex convict and renowned researcher, Dr. Stella Nyanzi has already taken to social media to celebrate with a poem. Stella accuses Kamasanyu of being an insensitive judge who lacks human empathy and instincts. She says even when she suffered a miscarriage during her detention at Luzira women’s prison, Kamasanyu denied her access to her family doctor.

Reckless lady in her judgements;

1. Fined DPC Old Kampala Joram Mwesigye only 10m yet Andrew Lwanga (WBS Journalist) remains crippled todate. She didn’t look into the fact that Andrew had spent over $10,000 in just his treatment for the injuries he sustained from the beating afflicted by the old Kampala DPC Joram Mwesigye.

2. Sentenced YMCA student, Brian Isiko for just expressing his affection for MP Sylvia Rwabwogo. She never considered the tears of the student’s mother and even the fact that the boy was to sit for his final examinations.