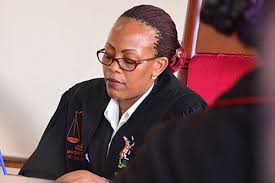 On Saturday July 17, Buganda Road court magistrate, Gladys Kamasanyu who is renowned for the Dr. Stella Nyanzi case was attacked by unknown assailants who thumped her to pulp. The attack took place in Kibuli just next to Greenhill Academy where a statement from the Judiciary claims she had gone to collect result slips of her son who has just sat Primary Seven.

According to the Kampala Metropolitan police spokesperson Luke Owoyesigire, the culprits successfully fled the scene with the belongings of the magistrate whom they had left down on ground wailing in deep pain. He adds that police officers arrived at the scene nearly 3 hours after the incident.

However, our independent findings have since suggested a different version of the narrative that is far divergent from what the judiciary spokesperson Jameson Karemani has shared with Uganda’s lazy mainstream media which is unquestionably fed with what to publish. Our investigation was inspired by the fact that the judiciary rushed to conclusions before the witnesses at the claimed site. It was as if they are deliberately covering up for their own to save her from losing a reputation.

It is important to understand that Schools are currently under closure with all transactions being made online. Her worship Kamasanyu’s claim that she had gone to Greenhill Academy moreover on a weekend is unbelievable. The physically fascinating magistrate is said to be in bad terms with her spouse over her dishonesty and sexual misconduct. It is said that she may be dating youngsters for survival. In fact some of her colleagues who went with her to school say the 2005 Makerere University LLB graduate is a serial cheat who has never settled in one relationship. Suspicions have been raised already in this incident with clues suggesting that Kamasanyu could have been clobbered as she set out for her cheating expedition. It is claimed that her husband is seemingly tired of her cheating which perhaps explains why her attackers simply wanted her mobile phone and not her life as case has been with past Boda Boda trails on high profile people who’ve ended up killed.

Greenhill Academy is still silent on the issue simply because they have failed to understand why a client (parent at the school) would park a distance away from the school premises in preference of a walk. Besides, the school is computerized and all its academic records can be shared online and we believe Kamasanyu knew the scores of her son and hence there wasn’t a need for her to rush for the result slip yet she is well aware that schools are closed and applications for senior one are likely to be in 2022.