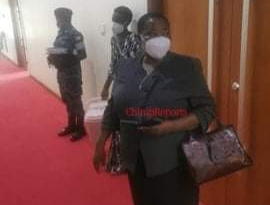 There was unprecedented drama at the office of the Prime Minister, Rt. Hon. Robinah Nabbanja after she was locked out of her office as her aide delayed to show up for work. Nabbanja who arrived an hour earlier than usual at 8am was shocked when she reached office and found it was locked with literally no one present.

As if that is not enough, reports show that even her verified official twitter account has been suspended and by the time of filing this report it was pending recovery.

Sources say a delighted Nabbanja arrived a little before 8:00am but found the premises closed and her office inaccessible. Her mood heightened and she angrily tarted making frantic phone calls to unknown people as her aides and police guards stood in the aisle of the building, looking stranded.

It took at least one hour for her to get any form of rescue after the Under Secretary James Collins Ddombo managed to get through to some of the staff and informed them of the ‘emergency’.