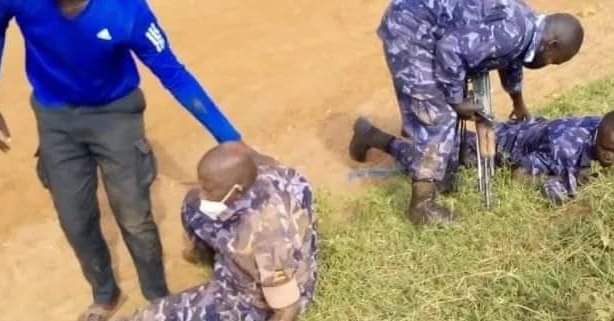 A Police patrol Car in Katakwi District was on Tuesday evening involved in an accident that left six Police officers and three suspects nursing wounds.

On their way back to the police station, the Car Reg. No. UP 8355 overturned at Alera Trading Center Along Usuk Road. Fortunately, no single death was registered.

According to the East Kyoga Regional Police spokesman Oscar Greg Ageca, the patrol car swerved off the road after a tyre burst and overturned several times. The injured were rushed to Katakwi General Hospital.

Eye witnesses however blame the police patrol driver for overspeeding recklessly without minding other road users. “They just drive the way they think. They don’t care about other road users,” Amoding, a resident close to the scene says. “We have burried several of our neighbours knocked by these reckless police drivers,” she adds.