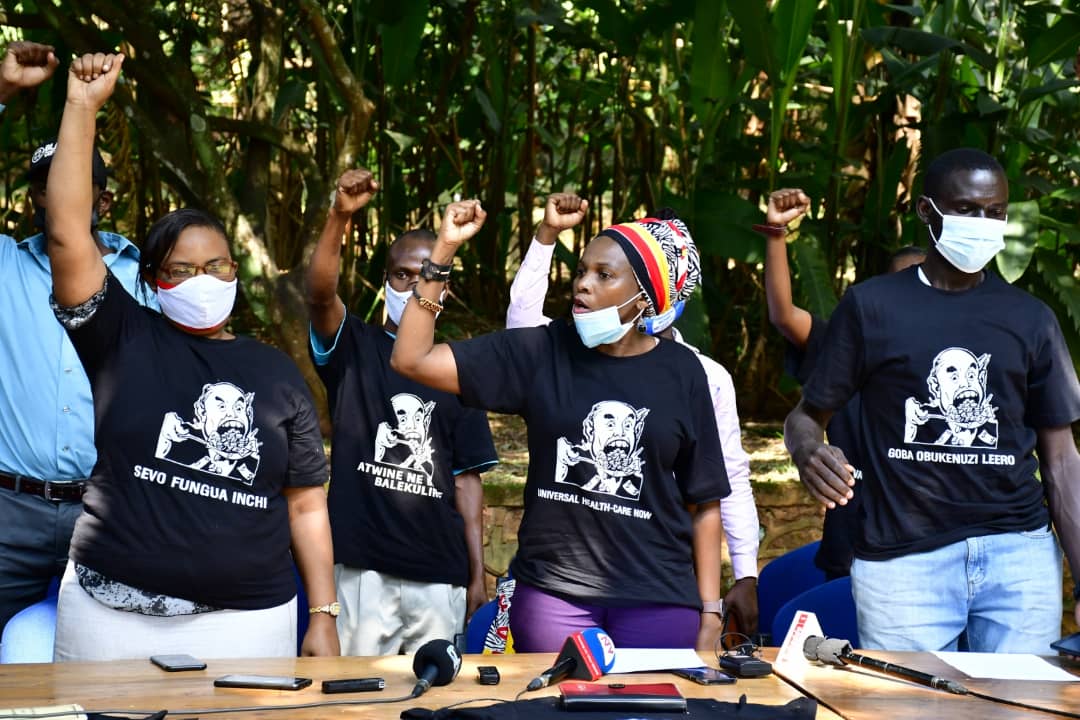 A team of Human rights defenders led by the renowned Namatta Annette alias Nana Mwafrika Mbarikiwa have today asked government to revoke the appointment of Dr. Diana Atwiine as the Permanent Secretary to the Ministry of Health. In a July 22 press release, the activists detailed the justifications for their disgruntlement.

UNION OF HUMAN RIGHTS DEFENDERS UGANDA CONCERNED ABOUT CONTINUED FAILURE BY GOVERNMENT TO ADRESS COVID19 INJUSTICES AND PUNISHMENT OF ERRANT ACCOUNTING PUBLIC OFFICERS.
35/42
To be released 22/07/2021 Thursday 10:00am
Fellow citizens this is a follow-up of our previous presser held on 05/07/2021 about covid19 injustices being perpetuated by government officers against peaceful law abiding citizens with impunity, from the time the pandemic visited our country.
we raised a number of issues to draw government attention and response to squarely address those issues but government chose to address them in a lucklustre and dissatisfactory manner living alot of gaps unfilled.
The health system in the country continue to be exposed by the covid19 pandemic because of its failure to handle patients efficiently due to absence of healthworkers, equipment and drugs, everything is being done in a crisis manner a clear testimony the health ministry officials and government had thrown caution to the wind by not drawing a plan or deviated from it for sinister motives of abusing office for selfish gains.

SEE ALSO: Dr. Atwine takes Covid cash stress to the beach
This has led to parliament setting up a special committee to visit all health facilities in the country to get a clear picture of the magnitude of the sorry state of the facilities,personnel and services altogether. Preliminary reports already show the bad state the entire health system is going through over the years,the facilities are as sick as the patients they seek to cure. The vaccines in the country are donated not purchased as 18.5bn Ushs budgeted for it never reached the NMS as the the front for its procurement.

The health ministry top officials keep peddling lies about the western countries that they bought all the vaccines from the source and third world countries aren’t prioritised but just recently Turkey and France donated more vaccines to the country,this clearly shows intended delay to process procurement of vaccines by certain top officials of the Health ministry or a bigger racket that spreads beyond the health ministry to other related government agencies.
PPEs personal protection equipment was found lying in NMS as health workers succumbed to death from covid19 infection due to exposure to covid19 patients they handle without protection,someone chose not to meet logistics cost to move around the equipments to the end users at the public health facilities.
The number of health workers succumbing to death by covid19 infectioncontinue to rise, just recently one Dr Isma 36 of Mukono is a case in point who died while admitted to a private health facility that charged him 90m to release his body,yet government pledged to intervene and ask private health facilities to reduce on medical fees they charge patients, it took the intervention of Hon Nambooze Betty Bakireke to fundraise a reasonable amount of the hospital bill for Dr Isma’s body to be released to the relatives for burial.

The day the health ministry and government chose to have no inclusive band comprehensive plant to fight the covid19 pandemic it is the day both failed, Ugandans are already victims of this negligence and abuse by public officers.

The education sector has suffered to pupils and students haven’t had serious learning for at least two years now,there are sons and daughters of the rich mighty and powerful in this country who aren’t affected by the closure of schools for they are able to learn through alternative means using technology through internet. Education is a human right which children shouldn’t accorded selectively. Government should put in place the necessary infrastructure to enable all Uganda’s children to access affordable education,if it doesn’t happen the country will continue to lose its potential trained and skilled human resource and manpower. Government should consider massive vaccination of teachers to protect them from contractions and transmission of the covid19 infections. Business community and traders wish to remove their merchandise some of are perishable because they are uncertain of their future and loss of capital in form of damaged goods.

The landlords seem to have connived with authority refused to let go the traders, this is an injustice which needs urgent intervention by government, traders who aren’t working should be assisted with affordable loans in future,rent subsidy and tax waiver by government ,an intervention that will secure businesses and put them back on their feet, this will save government from the problem of joblessness in the country post covid19 era.

Security should stay clear from using violence in enforcing the lockdown directions and the health act,this should be done through sensitisation by the local leaders bolstered by village health teams who should be equipped to enable them educate the public about prevention from the virus by using sops and boosting immunity to fight the virus incase of an infection.Brutalising wannanchi has a negative effect in fighting the pandemic because government loses social capital in form of good will by citizens to observe sops willingly.

The Nabbanja relief fund is a mockery to the 7.7 million UBOS registered vulnerable poor Ugandans,the Gender ministry headed by Betty Amongin for simplicity reasons chose to use the 501,000 persons data in the ministry’s possession to distribute 53.5 Bn shillings to the few vulnrrables,this has become unending excercise with 70,000 persons still haven’t accessed their share of 100,000 Ugx and are dying of hunger.
Government has always had a stand alone disaster ministry under Musa Ecweru but it is a disaster itself without capacity to manage even a minor disaster. The problem of Uganda is two ways there is either no plan or the plan is abandoned this was cited by the NPA testimony who said they had a plan to mitigate the covid19 pandemic but it was ignored and negated by Government,NPA officials were not even allowed to have a member at the national anti covid19 task force.
that was and remains terrible.
There were some Mps who suggested that the relief fund be given to vulnrrables from their constituencies to use as transport to go back home upcountry because they had run out of subsistence means in Kampala.
This was proved when about 14 people were arrested travelling bin a russo boxboard locked behind and we’re detected by road security cameras alighting from various points whenever the driver stopped.

1.After Ugandans shouted their voice hoarse demanding for the clean up of the Health ministry ,the president Mr Museveni chose to ignore Ugandans by reappointng and retaining Dr Diana Atwine the thieving permanent secretary of the same ministry without shame!
we now appeal to the members of the 11th parliament to be patriotic enough for once and censure this thieving public officer to save lives and the country from further losses.

2. The Nabbanja relief team should widen it’s scope and use the UBOS vulnerable data to capture the near actual number of Ugandan vulnrrables.

3. Traders and businesses should be consider for tax waivers ,rent subsidies and low interest loans in future to protect businesses since they are sources of livelihoods in a country jobs are nightmare.

4. Law enforcers should observe humanrights while trying to enforce observance of sops and respect for presidential directives and health act.
this Will help win hearts of the public to cooperate and willingly observe the sops without coercion.