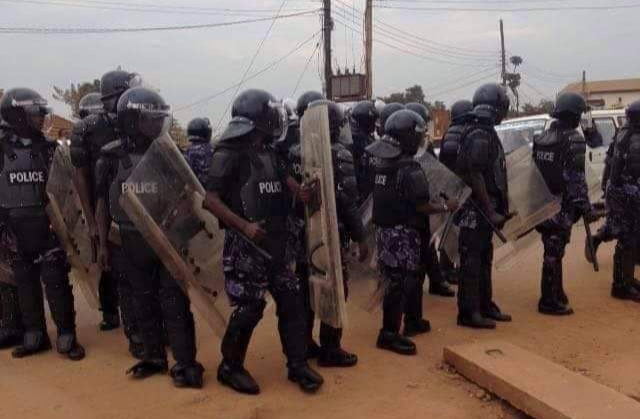 A yet to be indentified Police officer on Wednesday morning kicked a boda boda rider who was taking a patient to KCCA’s Komamboga Health Centre III.

The tragedy which occured along Mpererwe-Gayaza road saw the boda cyclist die on the spot. According to eye witness accounts, the deceased Boda cyclist fell off his bike after the sudden kick from the errant cop. He hit his head on the road hump, cracked his skull and helplessly bled to death while his two passengers sustained life threatening injuries.

People living close to the Mpererwe road say the Boda cyclist was carrying a visibly frail patient supported by the other passenger but police officers did not want to know the case. They add that this violent officer wielding an electric wire known as ‘solido’ approached the cyclist and instituted a heavy kick that saw the bike lose balance and skidded towards the pavement and suddenly saw the rider and his passengers fall off.

“We know this errant police officer. He is fond of brutalizing people. We watched with shock and fury as this Boda rider bled to death. We call upon police to investigate this officer,” one witness told this reporter. “The cyclist bled profusely to death by the time the police patrol took him to Mulago hospital. His passengers too were left in deep pain. We are unsure if they shall even survive,” he adds.

The Kampala Metropolitan police spokesperson Luke Owoyesigire said he was unaware of the scenario and added that he cannot give a comment till he is briefed on what ensued. Just a few days ago on the same street, police shot and killed a one Ssejjemba George who was alleged to have been part of the peaceful protest challenging the unfair delayed pay of the Kaleerwe market security group.