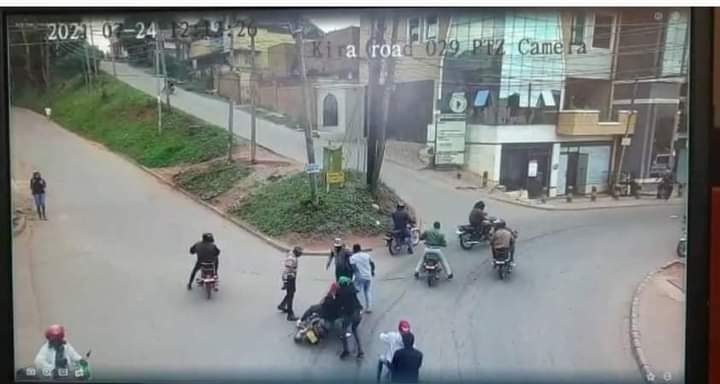 The territorial Police at Kira road are investigating a robbery incident that happened on the 24/7/2021 at around 12 PM along Mawanda Road in Kampala. The victim Jiwan Lal an accountant of Asian origin working with Rigil agro peck limited in Kololo was attacked by 14 men travelling on 7 motorbikes.

According to the released video clip, the victim was surrounded and assaulted continuously until his money amounting to 5 million Uganda shillings and 2 phones were stolen from him. The police recorded statements from eye witnesses and has started following up on leads that have proven helpful in identifying the suspects for arrest.

Pundits however say that is one of the yet to be seen scenarios if the impending lockdown is extended. There are anticipations that the wealthy and foreign nationals are likely to be targeted by angry and hungry people.

“Things will get worse and out of control. The poor will fearlessly and openly attack the rich like you saw in that police CCTV film where the Indian faced it rough. Politicians and foreign nationals will be targeted by the angry masses,” predicts one analyst who asked not to be named. “We hope the lockdown is not extended as rumoured otherwise the population may explode onto the streets,” he warns.

In the other parts of the world, the lockdown is being protested by the public. Authorities in Australia are apparently clashing with protesters on the streets who remain determined to see the lockdown lifted. Similar incidents are likely to be witnessed in Uganda should the government extend the lockdown.