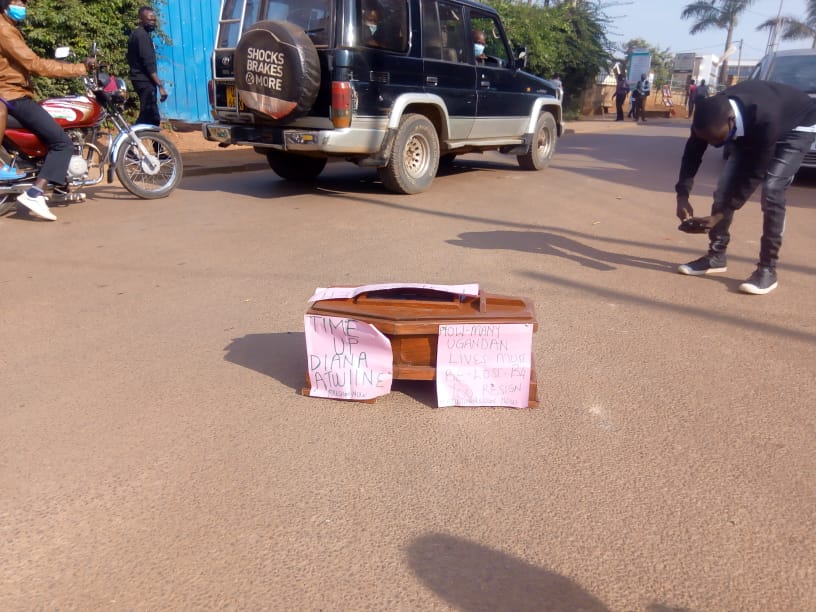 Doctors and residents close to Mulago national referral hospital have this morning woken up to shocking scenes of a baby coffin dropped by unknown people protesting the reappointment of Dr. Diana Atwiine as the Permanent secretary to the Health Ministry. Over the past weeks, Dr. Atwine has been embroiled in clashes with a huge section of the public calling for her resignation over her alleged failure to handle the covid pandemic.

In the recent presidential reshuffles, a large section of Ugandas were heavily expectant that Dr. Atwine would be dropped after numerous scandals implicating her in the covid money heist had surfaced but surprisingly, Museveni retained her in the position.

This is what perhaps inspired a morning protest at Mulago national referral hospital. Traffic remains at stand still with the coffin abandoned in the middle of the road heading to the Mulago main gate. Our efforts to establish if the coffin contained a corpse turned futile upon the arrival of police. But sources present at the scene say the protesters claimed one of their relatives had died due to Atwine’s recklessness. They argue that the coffin contained a corpse, something Ekyooto could not independently ascertain.

By the time of filing this report, police had not issued a statement on the protest. Kampala Metropolitan police spokesperson Luke Owoyesigire says they have already started this investigations into the protest. 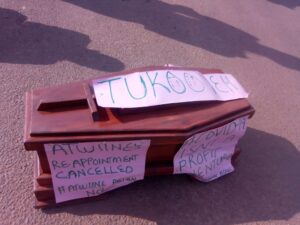