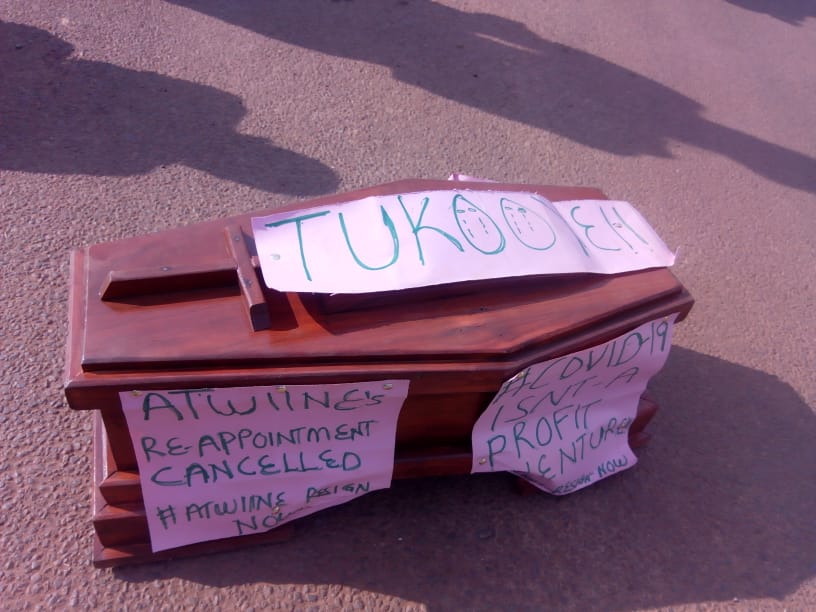 The Ministry of Health has issued a condemnation statement on behalf of its permanent secretary Dr. Diana Atwine who faces a public backlash over the mismanagement of the covid pandemic. On Monday very early in the morning, a team of unknown people dropped a labelled casket at Clement Hill road near Mulago hospital in protest of Atwine reappointment as permanent secretary.

However, addressing media on the same issue, the spokesperson for the Health Ministry Dr. Emmanuel Ainebyoona said they will not succumb to public pressure or any intimidation targeting their own members. Ainebyoona says that the unknown protesters simply have a hidden agenda of suppressing the resolve of the Health Ministry. He adds that whoever was behind the coffin stunt is simply politicking but as MoH, they will continue to work with Dr. Atwine.

“We have already tasked police to investigate on who was behind this regrettable action. As MoH, we assure Ugandans that we shall continue to serve to their expectations,” he said. “Our boss is not threatened by these politically motivated attacks aimed at demonizing her. She remains committed to patriotically serve the nation,” he added.

Despite the defence from MoH, protesters remain determined to have Minister Frank Tumwebaze’s sister in law (Atwine) thrown out of the seat. Fresh yet to be confirmed reports suggest that Dr. Atwine secured a government and state house scholarship at Mbarara University of Science and Technology despite scoring very few points in the Uganda Advanced Certificate of Education exams. A source familiar with Atwine’s academic journey confidently says she scored only 12 UACE points out of 25, which by then were too few to enable anyone progress on government scholarship.