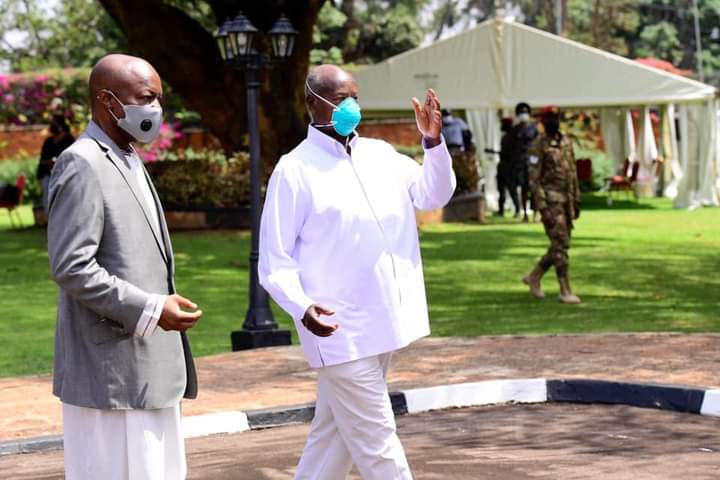 President Yoweri Kaguta Museveni Tibuhaburwa has been frightened by the recent Kabaka comments during the 28th coronation anniversary held in Lwengo district. In his remarks, the Kabaka had openly castigated the central government for derailing from the core agenda of siding with the people. The Kabaka added that without Buganda’s input, the 1980-85 guerrilla movement was bound to fail.

Moments after these harsh remarks expressing the Mmengo position on the central government, a fearful Museveni through the premiere Charles Peter Mayiga asked for an appointment with the Kabaka His Majesty Ronald Muwenda Mutebi II fearing heightened tensions between his regime and the cultural institution.

A meeting has this Tuesday sat at State House Nakasero where the Kabaka himself in company of the Katikkiro Mayiga and prince David Wasajja met with Gen. Yoweri Museveni.

Sources that attended the private meeting say Museveni has changed his mind on the land question fearing that it may heighten tensions and drift into chaos as the general public and political leaders remain opposed to the proposed land reforms that seek to abolish the Mailo land system.

The source further adds that Museveni has since expressed some ‘remorse’ to the Kingdom having been reminded of its role in the liberation struggle that toppled the Obote era.