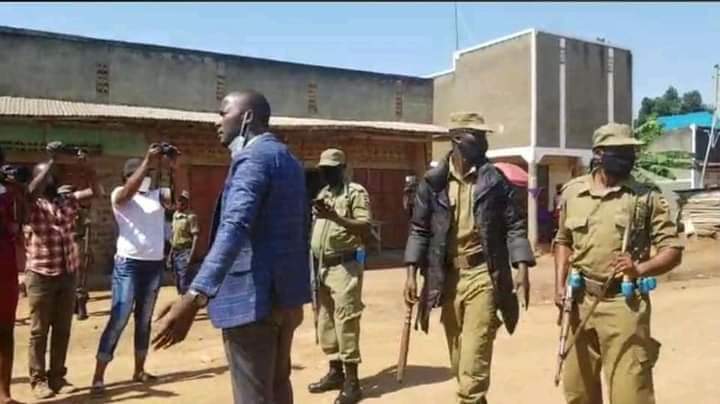 Today Bobi Wine’s wife, Barbie Kyagulanyi survived by a whisker as Police fired tear gas and live bullets in Nakaseke to disperse gathering pregnant women who had convened to access some relief items.

Mercilessly acting with orders from the RDC Nayebare, the police opened fire on MPs, pregnant mothers, babies. Scores of journalists too were arrested at a health Centre in Kikamulo III, Nakaseke where area MPs were planning to deliver maternity beds and other items.

Many included journalists have been shot and were later rushed to hospitals and health centres in critical conditions.

Police says this is not time for campaigns nor are people allowed to crowd during these trying times of covid 19.

The DPC of the area said that no one will undermine the security of this country to spread the dangerous Covid virus that bas claimed the lives
of many.

“We shall not hesitate to arrest all those who think are big headed and above the law. No one is going to undermine the security of this country.” He roared

“Nobody from Bobi Wine family should step in Nakaseke for as long as I’m RDC,” Nayebare says. “Time for politics ended. We now want development not politics. I want this to serve as a warning to Bobi and his family,” he warns.

Nakaseke RDC Fred Nayebare has unapologetically bragged over his raid on a health centre in an attempt to bar wife to opposition leader Bobi from visiting expectant mothers.

The raid ended with multiple injuries as journalists, local leaders and the expectant mothers weren’t spared.

One woman who has been identified as a journalist was shot in the leg with a rubber bullet.