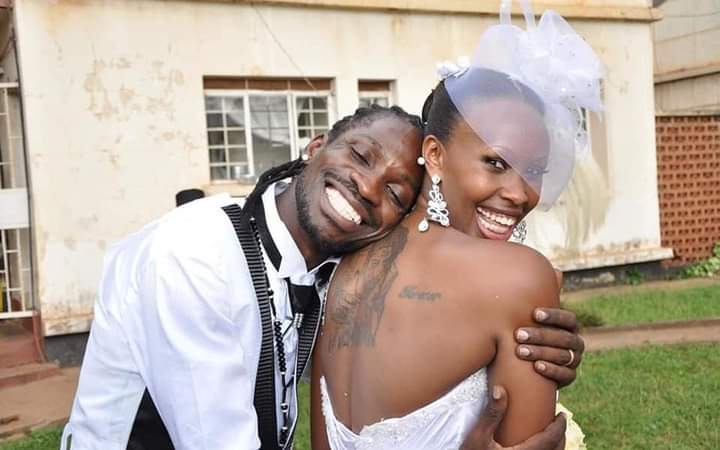 On this day in 2011, Kampala city streets froze with hordes of people thronging the streets to celebrate the wedding function of then popstar Bobi Wine.

The crowd charged with chants and ululations appraising the superstar followed him all the way from Rubaga cathedral to the streets. The excitement bubbled beneath skins and vibrations right down to the bones would be felt. The energy was contagious, one would literally feel and hear the high voltage zinging through all the people. Bobi Wine and his childhood lover Barbie Ithungo donned in their wedding attire combed through the streets of Kampala on a chariot pulled by a couple of horses gifted to him for the day by renowned city tycoon Sudhir Ruparelia. The wedding setting was natural, people cheered on with ululations. All Television and radio broadcasters switched to streaming the wedding event live. It was the most watched live wedding event in the recent history of Ugandan Television. The broadcast ignited sight from Rubaga cathedral where the couple was happily wedded amidst an event thronged by dignitaries from Buganda and central government. The wedding was graced by then Archbishop Dr. Cyprian Kizito Lwanga (RIP). It is said Bobi chose this date to honour and express his gratitude for the Kabaka of Buganda His Majesty Ronald Muwenda Mutebi II who also wedded the Nabagereka on this same date.

Bobi and Barbie met at a high school drama show in their youthful days of the 1990’s. The duo’s fantasies turned a reality after their stage drama. Bobi followed Barbie past the stage drama and their dating kicked off. It was a hard and unpredictable decision for Barbie to leave off the wealth at her noble home to lounge off to a Ghetto like Kamwokya and start a new life with a financially struggling Bobi. Their love was a reality. It transcended social class stratification, unlike most relationships today.

Years later, the couple happily had four children as fruits of their love. In 2017, Bobi whose music largely hit political trends made a choice to join leadership. He won the Kyadondo East polls and later advanced to the presidential seat. His criticism for the regime has since made him targeted by the regime.

In 2018, Barbie was forced to mark their 7th wedding anniversary in sorrow as Bobi had been detained by the military following his arrest in Arua. It’s perhaps one of the most sorrowful moments for the inspirational couple.