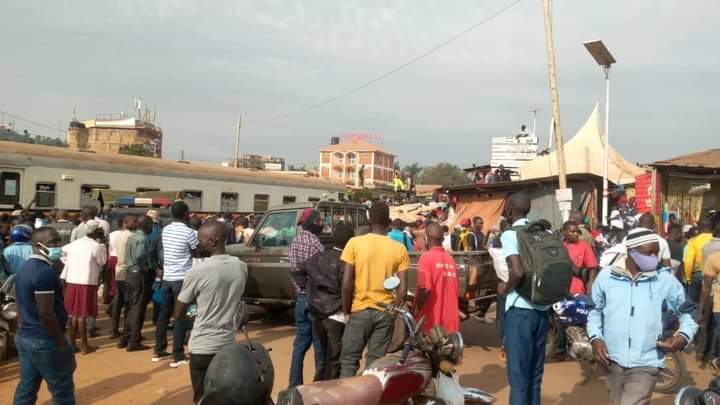 A speeding UPDF lead patrol truck has this morning rammed into a train in Kireka, a low income suburb in the outskirts of the capital, Kampala.

At least 2 UPDF soldiers have been confirmed dead in the train crash while some civilians sustained minor injuries. Eye witnesses blame the UPDF driver for failing to respond to a signal that clearly showed that a train was advancing.

“Other road users responded positively to the signage reading ‘railway crossing’ unlike the army driver who seemed to be in a rush,” an eye witness retorts. “It was a terrible accident, I can say. We are so frightened,” he adds.

Meanwhile, police have already rushed to the scene to tow off the wreckage of the army car.

Police at Kireka working with fire and rescue services have responded at an incident where a Updf Land cruiser H4DF2180 was involved in a derailment with a Uganda Railways locomotive.

The fire and rescue services was able to rescue two UPDF soldiers albeit, in very critical condition.

The two, both privates, have been taken for treatment.

The situation at the scene is now contained and normal traffic has resumed.
ASP LUKE OWOYESIGYIRE
DEPUTY PRO KMP