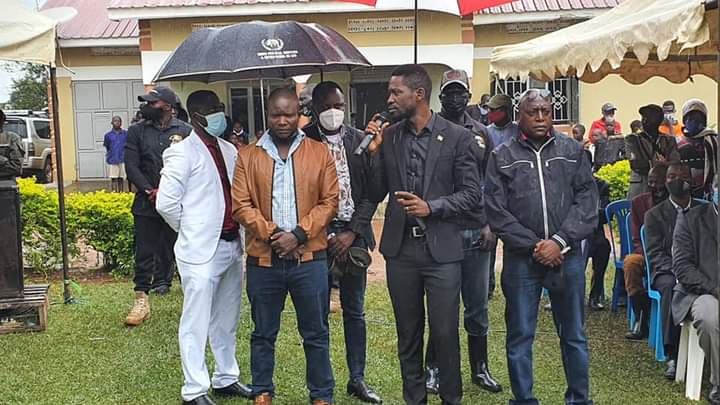 The National Unity Platform party president Kyagulanyi Ssentamu Robert aka Bobi Wine who just concluded a trip to the diaspora has upon his return attended the send off of renowned veteran Disk Jockey, Emmanuel who passed on last week.

DJ Emma was a staff at the official Buganda kingdom radio broadcaster dubbed CBS. He passed on at his residence after grappling with a long complication.

In his brief comments, Bobi who was accompanied by some NUP MPs who were formerly musicians urged all artistes and entertainers to be the messengers of change. “We are the voice of the people. We the artistes and performers must continue to advocate for the demands of our people,” Bobi said. “We have a vital role to play in making our country a better place,” he added.

In his conclusive statement, Bobi comforted the family of the deceased and urged them to remain firm. “Emma has not lived to see the new Uganda,” he remarked. “But I know his children will see that new Uganda,” he added.

Excitement and Joy was the main scene in Namutumba district in Busoga as youths charged upon seeing NUP President Bobi Wine.

There were tears of joy, cheers and excitement as the residents of Namutumba saw Hon Kyagulanyi Robert in their area as he headed for the burial ceremony of DJ Emma.

Loud chants were heard praising the National Unity Platform President thanking him for standing with the people amidst the violence by the security forces that bolded out in the just concluded elections.

Kyagulanyi however didnot stop to address the congregation but rather waved at them as he proceeded to the burrial venue.

Speaking to some of the residents, Mr Yisabirye Peter a chapati maker said that he was excited to see the official and duly elected president of Uganda adding that he was going back to tell his children and wife that he has been blessed to see a freedom fighter.

Mrs Jane Babirye a restaurant owner in the area said that she wished Hon Kyagulanyi had branched to her restaurant so that she could serve her any dish he wished to eat. She adds that if this had happened , she would even spend a week minus allowing customers to seat on the chair which Hon Kyagulanyi would have used neither the plates and forks.