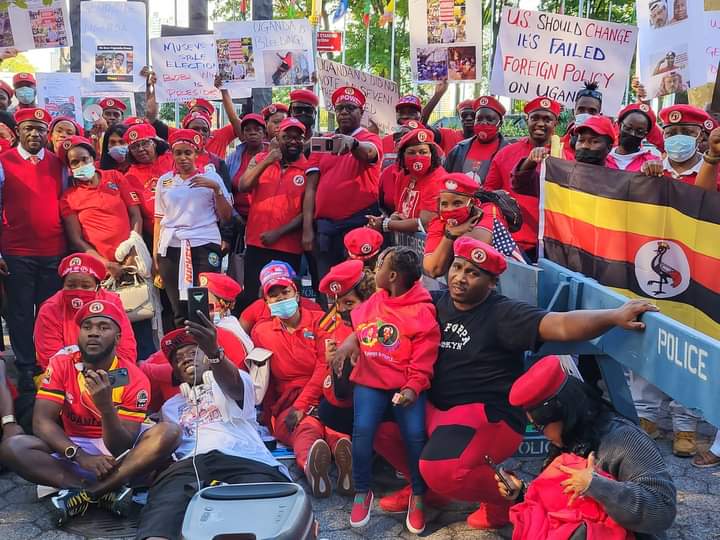 A huge section of Ugandans living in ththe w United States have flooded the Headquarters of the United Nations in New York city to extend their message of discontent to the world leaders present at the general assembly.

The Ugandans who are mainly opposition supporters of the National Unity Platform party are armed with placards, megaphones and branded red t-shirts inscribed with wordings denouncing the leadership of Gen. Yoweri Museveni who they accuse of using his power to undermine the will of Ugandans.

NUP president Kyagulanyi Ssentamu Robert aka Bobi Wine was supposed to be present at the protest but his journey was cancelled over COVID-19 restrictions that prohibit people with a travel history to South Africa from arriving in the US if they are within the 14 days time frame. However, NUP leaders like Fred Nyanzi Ssentamu of the informal sector, Hon. Zaake Francis Butebi of the youth wing and Geoffrey Kayemba Solo physically attended the protest.

The protesters were mobilized by the NUP diaspora coordinator Herman Ainebyoona. “Lets make our message amplified to the world leaders. Ugandans are suffering because of Museveni’s dictatorship,” remarked Ainebyoona. “We want world leaders to detach themselves from associating with a ruthless dictator,” he added.

Meanwhile while the UN general assembly is ongoing, Uganda’s dictator Museveni shunned physical attendance and opted to appear via a video link. He even denounced human rights abuses in his remarks to the covenants at the General Assembly.

Encouraged to see comrades in the diaspora turning up in big numbers outside the UN Headquarters to protest the continued oppression of fellow citizens back home by dictator Museveni’s regime. This protest comes at a time when over 100 Heads of State/Government are converging in New York City, USA for the 76th Session of the UN General Assembly during which human rights and other governance issues are central themes for discussion. It behooves all of us, friends, to continue expressing our dissatisfaction with those holding our country captive, using all and any available means possible. #UgandaActionDay #UNGA76 #WeAreRemovingaDictator