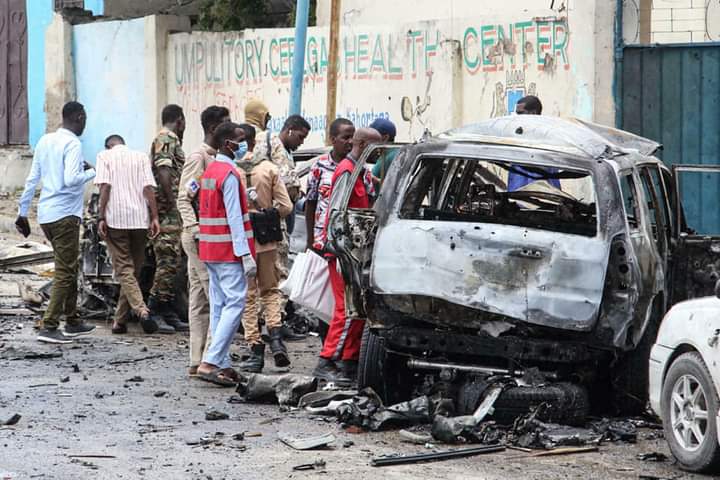 At least eight people were killed Saturday and nine others injured when a car bomb exploded on a street corner near the president’s residence in Somalia’s capital, Mogadishu.

Witnesses said a car loaded with explosives was detonated at the Elgab intersection while it was stopped for a security check. The blast destroyed a number of cars parked nearby, witnesses added.

Somali police spokesman Major Mohamed Hassan said that eight people, including a police officer, were killed in the blast.

Militant group al-Shabab has claimed responsibility for the attack, saying it targeted the main security checkpoint of the presidential palace. The group said, “Commanders and government officials stayed in the area when the attack occurred.”

Somali government spokesman Mohamed Ibrahim Moalimuu said in a message posted on his Facebook page that Hibaaq Abukar, who was a staffer at the office of the prime minister, was among those killed in the attack.

Somalia Prime Minister Mohamed Hussein Roble said Abukar was an active member of a team dealing with women’s issues.Ambulances and Red Crescent workers were seen rushing to the scene after the explosion.

On Friday, a suicide bomber attacked a busy street. Somali police said the bomber struck around 3 p.m. local time and there were no causalities except “for the one who killed himself.”

Somalia’s political crisis intensified Friday when negotiations to reconcile issues between the president and prime minister failed. Regional experts warn if the power struggle between leaders continues, the country could sink into a civil war and the election timeline could be delayed.