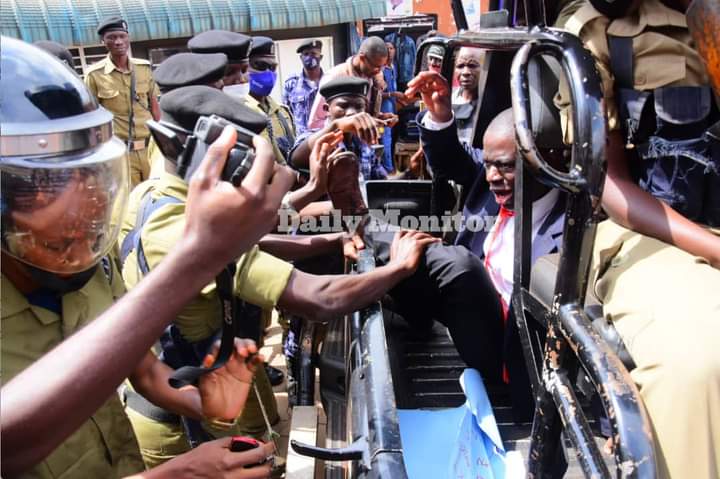 One of the arresting police officers inside the Toyota Hiace model vehicle commonly known as a drone mercilessly hit Kawempe North MP Muhammad Ssegirinya during rearrest, reliable sources at SIU have revealed.

SEE ALSO: Ssegirinya is a terrorist, says Enanga as he confirms rearrest

A concerned police officer who spoke to this reporter says MP Ssegirinya was hit on the ribs with a gun butt even when he had been subdued by the security crew deployed to arrest him.

“He is frail and weak decrying pain in his right ribs. He told me he was beaten by his captors inside the drone,” says the police source. “Sometimes our officers go to these operations with cruel tactics. They want to show authority especially when handling political related cases like this one,” he adds.

Ssegirinya faced humiliation upon his release from Kigo prison on Tuesday afternoon after a drone intercepted him and his lawyer Shamim Malende as they drove off at breakneck speed to evade any possible rearrest. During the chase spearheaded by a Toyota double cabin police truck, Shamim Malende’s vehicle was knocked on the bonnet to deter it from leaving the prisons precincts with Ssegirinya aboard. She was eventually overwhelmed by the heavily armed gendarme of counter terrorism police crew members who grabbed Ssegirinya out of the vehicle and inserted him in their drone. Ssegirinya’s plea for a decent arrest fell on deaf ears as his captors did not give in to his cries. He was heard saying that he is ‘sickly’ but none of the officers was moved.