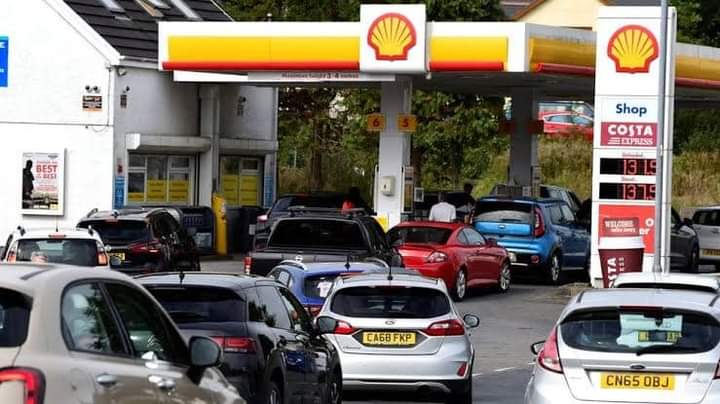 The chaos at British petrol stations has been splashed across the front pages of European newspapers, which placed the blame for the UK’s fuel crisis squarely on Brexit.

SEE ALSO: UK leadership hopefuls vow to succeed where May failed on Brexit

Papers led with reports of pumps running dry, motorists queuing for hours and the Army being on standby to deliver fuel.

It takes one almost 8 hours queued in a line waiting to take fuel not exceeding 30 pounds.

In Spain, Wednesday’s El Pais newspaper featured the petrol panic as its main front page story. The headline, “Brexit unpredictability exacerbates UK supply crisis”, drove home the gravity of the issue with a picture of a UK petrol station with a “no fuel” sign in the window.

The piece said the situation was “so flammable that it threatens to scorch the Government and the opposition” and accused the UK’s leadership of being unprepared.

French newspaper Liberation noted that “worried Britons” had drained petrol stations, while Catholic daily La Croix splashed with: “The British out of gas”.

An opinion piece in the publication claimed the UK was in a “dire situation”, adding that Brexit was neither “a good idea nor was it free”. It said that experts had warned the UK’s exit from the European Union would be “politically damaging” and “a lousy business”.

European politicians and officials have also weighed in on the situation. On Monday, Edwin Atema, from the Federation of Netherlands Trade Unions, said: “The EU workers we speak to will not go to the UK for a short-term visa to help the UK out of the s**t they created themselves.”

Despite the headlines about Britain’s fuel shortage at the pumps transcending borders and European residents gloating about queue-free petrol stations, Europe is not unscathed by the shortage of HGV drivers.

However, Europe is not unscathed by the HGV driver shortage. While the impact is not yet as great in the EU, there are reports of a shortfall of lorry drivers on the continent, which could lead to supply chain challenges