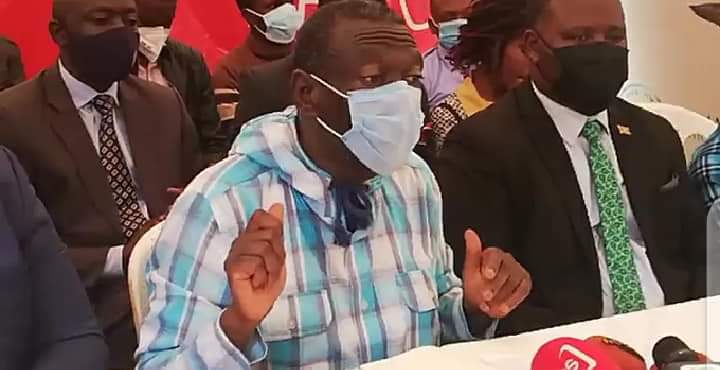 Members of the Front For Transition pressure group have today gathered at the JEEMA Headquarters in Mengo to address the public on their agenda amidst heavy Security deployment around the Party headquarters.

Though the public earlier expected the security to swing into action and disperse the gathering as case usually is with NUP conferences, the PFT successfully launched its agenda with no interruption.

Dr Kizza Besigye the main head in the pressure group has said its now or never to get rid of Gem Museveni’s dictatorship with this new front of salvation formed to act as conduit between the change seeking forces.

Besigye says those spreading negative energies around are henchmen of the junta regime who are paid to puncture whatever positives the suffering Ugandans try to come up with to oust the regime. He says those who are castigating him are regime henchmen. “Those who don’t want to be part of this can form their own fronts. We all need to rally together, strategize together and we win the struggle,” he stated.

Besigye adds that Gen Museveni and his colleagues who have made Ugandans suffer for the last 35 years will have to pay for their sins further adding that no one will walk away free after commiting crimes against humanity.

The presser has attracted so many notable political players like Lord Mayor Erias Lukwago, Besigye, John Kenny Lukyamuzi, Lubega Mukaaku, Kenneth Paul Kakande and many others.

The Democratic Party, Alliance for National Transformation party and the National Unity Platform party were still a no show at the presser.