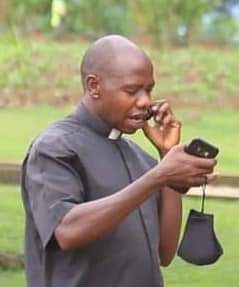 Fr Richard Mugisha, a renowned Catholic priest at Bisanje Parish in Masaka Diocese, who during the campaign trail was in the spotlight for using the pulpit to ask Ugandans to vote for change in the just concluded 2021 General Election.

In the video clip, which went viral on various social media platforms, the youthful priest condemned top government officials for not prioritizing issues affecting Ugandans, but instead focus on themselves.

Remember, Fr Mugisha accused Museveni of failing to stick to his promise of relinquishing power after clocking 75 years.

Daily Monitor reported on the similar incident on Friday November 13 2020 that; Priest on the spot for preaching change

Now, the priest, Reverend Fr Richard Mugisha has been summoned in relation to the death of Ronald Kyeyune, 30, a suspected robber who had allegedly broken into the priest’s house. It is alleged that the suspect was apprehended by the village security team after allegedly accessing the priest’s residence through the roof.

Reverend Fr Mugisha says that he had not been informed about the suspect’s death, but added that he was unhurt by the time he was handed over to police.

“For anyone who understands well this regime, it is clear that Fr Mugisha is now persecuted politically. Very evil regime! it finds no problem in killing to persecute political rivals,” reacted one of the friends of the troubled cleric. “They want to silence him for being critical of the dirty regime,” he adds.