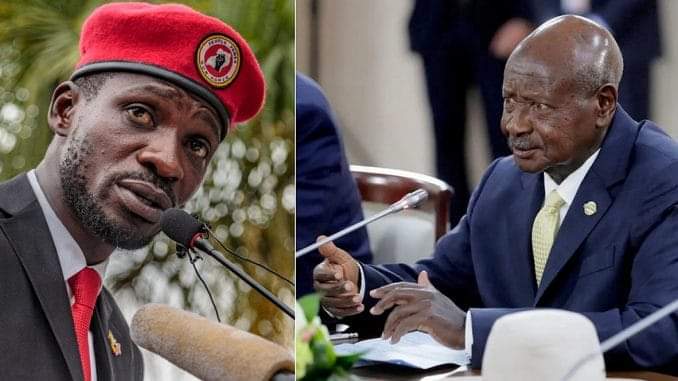 The National Unity Platform party president Kyagulanyi Ssentamu Robert aka Bobi Wine says any time soon Museveni himself shall be paraded in the court dock where he shall also plead for the same bail he is fighting hard to scrap.

Hon. Kyagulanyi made the remarks this Tuesday morning in an interview with NTV at Kamwokya NUP head offices. Wine says that scrapping bail is just a political tool being created by Mr. Museveni so he can easily persecute the political actors he disagree with. Kyagulanyi warns that even the seconders of the same bill will fall prey to it when time comes.

“Museveni himself is a candidate of bail,” Bobi stated. “I am out on bail even when the charges were bogus. That bogus case on Ssegirinya will be dismissed. Those people passing the amendment may not know when they will need bail. They better not be used to remove it,” he added.

Bobi adds that the NRM regime is just trying to sanitize its impunity by bringing these bail removal laws.

On the new Besigye front dubbed People’s Front for Transition, Wine says he is open to any efforts to dislodge the prevailing dictatorship. He criticised those in the opposition that are trying to initiate divisions.

“It is so shameful to the people that we represent to see us fighting amongst each other. It shows that we are only being reduced to the politicians that they hate. Ugandans hate politicians because they’ve had enough of politics,” he stated. He further adds that he won the 2021 polls massively. “We just came out of one of the most fraudulent elections Uganda has ever had. We clearly won this election but as we speak right now many of our comrades are in prison for no reason. The regime has reignited its efforts to suppress voices,” he said. “Gen. Museveni wants to silence everybody. If he cannot compromise you, he wants to suppress you. Any fights within the forces of change will produce no winner. These fights only benefit president Museveni. When he sees us against each other, it sends him on holiday,” Wine added.