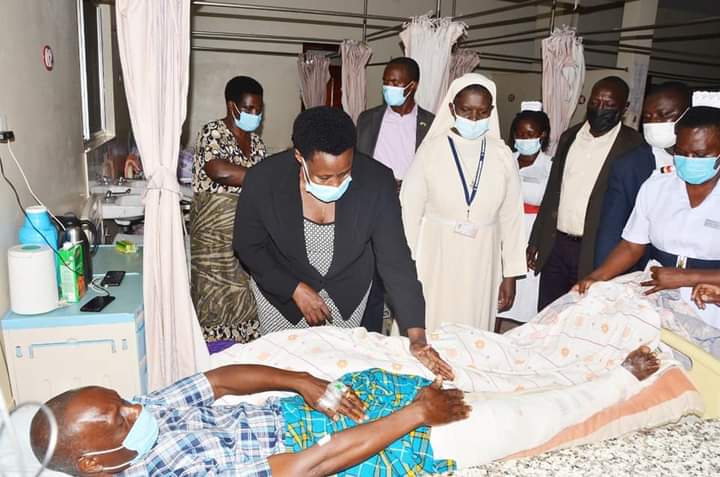 Vice President Hon Jesca Alupo has come out to condemn the acts of terrorists who attacked Uganda by blowin bombs in Komamboga and on bus in Masaka Kampala highway saying that these are just cowards are going to be defeated easily.

“These are cowards, and we will make sure that they are defeated; to ensure that the country remains secure,” Alupo said.

The vice president’s words camw after she visited on of the survivors on Tuesday morning, at St. Francis Hospital Nsambya Superintendent of Police Adrian Kwetegyereza, who survived the bus attack at Lungala along the Kampala-Masaka highway.

Kwetegyereza, who is the acting Regional Police Commander of Greater Bushenyi, survived the bomb attack, alongside other passengers, when a bus belonging to Swift Safaris Bus company Registration Number UAU 989T, was attacked in a bomb explosion that left one person dead and another sustained a fractured leg.

At Rubaga hospital, the vice president condoled with all the families of those who lost their loved ones in the two attacks separate attacks.

“I do pass on my sympathies, to all those who have lost their loved ones in these bomb attacks. We will make sure we defeat all those who are killing our people,” she re-emphasized. “We will do all it takes, to secure all Ugandans and people and their property, in this country,” she added.

The Vice President, during her visit to the hospital, was welcomed by the hospital’s Administrator Sr. Mary Cleophas Kizito, the Senior Principal Nursing Officer Annet Mirembe, and the Ward in-charge Christine Muzaale Anna.

President Museveni on Tuesday morning said the deceased person in the Swift bus explosion was a suicide bomber and was being tracked by the Chieftaincy of Military Intelligence(CMI) after the attempted attack on mourners during the burial of Lt Gen Paul Lokech in Pader earlier this year.The deceased suicide bomber has been identified as Isaac Matovu.

According to police, preliminary investigations have pointed to the allied Democratic Forces(ADF) terrorist group to be behind the two separate attacks.