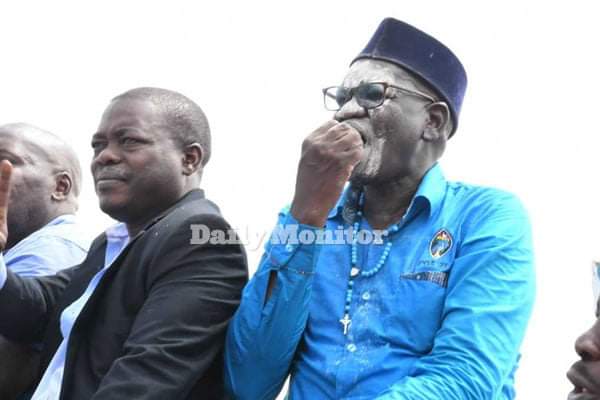 Waiswa who addressed student leaders from Makerere University and MUBs at the party headquarters in Kamwokya described the perennial politicians as ‘old wine in new bottles’.

In a veiled reference to FDC’s Eng. Patrick Amuriat Oboi, Waiswa said the former presidential candidate is just ‘Sick in the head’ to think that NUP is an obstacle to their newly launched front.

“We found you with 32 MPs and it’s what we’ve left you with. If you don’t recognize the efforts of NUP in Uganda’s liberation struggle then you are sick in the head. Fielding 57 MPs is not a joke for a party that just started,” intimated Waiswa. “Some think we are in their space. We are not the opposition but the option. We have never occupied anyone’s space. We are after the dictator, not those who are after dominating the opposition,” he added.

Waiswa also reflected on the opposition unity efforts championed by NUP president Kyagulanyi Ssentamu Robert aka Bobi. He says the popular opposition  leader tried his level best to achieve unity with other opposition players only to be failed by the FDC leadership.

“We’ve called for unity. The president himself chaired over 20 meetings with those opposition politicians but in vain. They claimed we don’t have a party and that we are not well structured, when we registered it they said it was so fast. Our business is to remove the dictator not to be in the opposition,” he remarked. “They have vulgarized our struggle. The dictator buys people to attack Kyagulanyi on media. The dictator is not only buying professionals and musicians but also president generals of political parties. When you see them attacking then know they have got their pay cheque,” he added.

Waiswa added, “The man of powder should lecture Salam Musumba to stop flying with Museveni to Rome. They called us to a meeting chaired by Joyce Nabbosa Ssebugwawo. Should we imagine that they didn’t have intelligence to know she was hobnobbing with the Junta who afterwards named her a minister?”

“If you attack Kyagulanyi, expect a retaliation from the deputy spokesperson. I will not fold my hands as detractors are attacking our president,” he vowed.