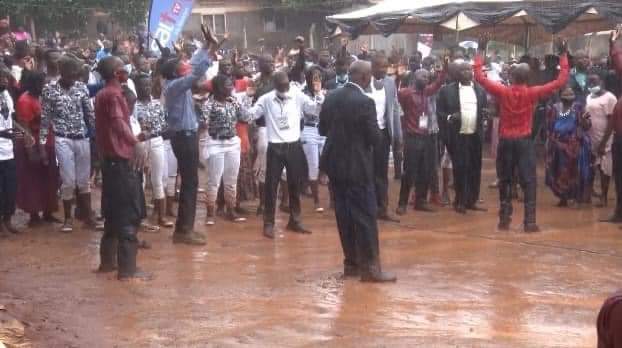 “…this Parasite/Monster steals from POOR people to build for his Side Chicks…,” Hannington Bujingo tweeted.

Very early on Wednesday morning, comedian Hannington Bugingo called out Pastor Aloysius Bugingo, referring to him as a “parasite” and “monster” that “steals from poor people to build for his side chicks.”

It is not clear what irked the FunFactory Uganda Managing Director to harshly lash out at the House of Prayer Ministries International pastor.

Through a tweet, Hannington Bugingo asked the government of Uganda to step in and stop the pastor from “stealing” from his flock.

In the photo attached to his tweet, a caption read:

“Don’t say we didn’t remind you. The theme of the teaching on Salt TV was “test the Lord with your 10% and the floodgates of heaven will be opened for you.”

The collage had photos of the city pastor preaching in his church seated next to a pile of money, account numbers where tithes and offerings can be sent, and the house he reportedly built for his lover.

How on earth can @GovUganda 🇺🇬 Look on as this Parasite/ Monster Steals from POOR people to build for his Side Chicks?😳🇺🇬🙌🏿This Non sense has to stop pic.twitter.com/yFFBUOz4UV

As expected, the comments that followed the comedian’s statements had mixed reactions in them as the pastor’s followers flocked it to defend their leader.

Pastor Bugingo has often retaliated against those who publicly criticise him during his sermons, sometimes in an abusive language.

Whether he will pick up on this battle where Hannington left it remains to be an answer time will give us.