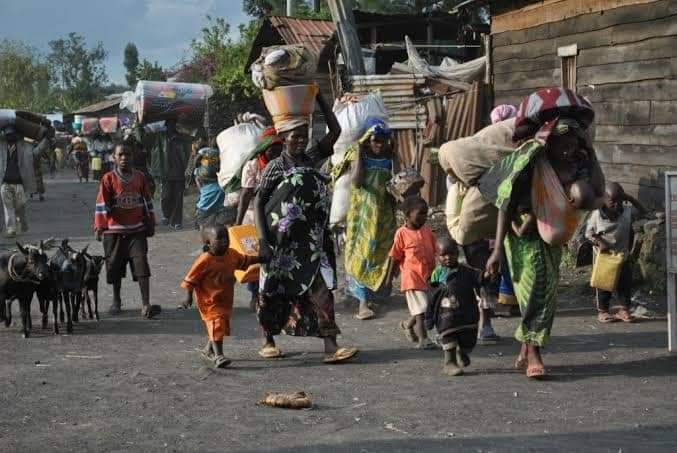 Thousands of Congolese are fleeing to Uganda as fighting intensifies between rebels and government troops in their villages.

In a statement, the Armed Forces of the Democratic Republic of Congo (FARDC) said fighting with rebels of the March 23 Movement (M23) broke out in North Kivu province after the rebels attacked military positions of Chanzu and Runyonyi, destabilizing Rutshuru territory.

In 2013, the M23 rebel group signed a peace agreement in Kenya’s capital Nairobi with the Congolese government.

Under the agreement, the M23 accepted to be demobilized and to renounce violence while the Congolese government in turn committed to implement a demobilization process and grant amnesty to some members of the group who had not committed “serious crimes.”

“The M23 insurgent movement attacked army positions with the intention of carrying out further destabilizing actions in Rutshuru territory and elsewhere in the province,” Brig. Gen. Sylvain Ekenge, deputy spokesman for the FARDC general staff, said in a statement.

In July 2020, the M23 had unsuccessfully attacked the localities of Bigega, Ndiza and Mikenge in the vicinity of Chanzu in North Kivu.

In January 2017, the group was defeated by the FARDC in its flawed attack on the Sabinyo, Visoke and Karisimbi mountains in Rutshuru territory.

“Faced with this situation and as part of its sovereign mission to defend the borders and integrity of the territory of the Democratic Republic of Congo (DRC) and to protect the populations and their property, the FARDC has taken all the necessary measures to thwart this umpteenth incursion of the M23 on Congolese soil. At the moment, the FARDC is determined to put an end once and for all to this armed group which must be neutralized definitively,” said Ekenge.

According to some of the refugees, the fighting started late Sunday night in Rutshuru territory. They fled to Bunagana town, from where they are crossing into Uganda.

“Thousands of refugees are coming in from DR Congo via the Kisoro Bunagana border and are being hosted at the Nyakabande refugee transit center,” Irene Nakasita, a spokeswoman for the Uganda Red Cross, said in a press statement.

She said the decision taken by Kisoro district authorities this afternoon authorized the registration of the refugees to commence. After registration, the refugees will be taken to refugee camps about 20 kilometers (12.4 miles) from the border.

She said preliminary information indicates ongoing heavy fighting in DR Congo and an army barracks taken over by a yet to be identified force. The fighting started in the Chanzu hills and Runyonyi village near the Virunga ranges, forcing hundreds of people to flee to Uganda.