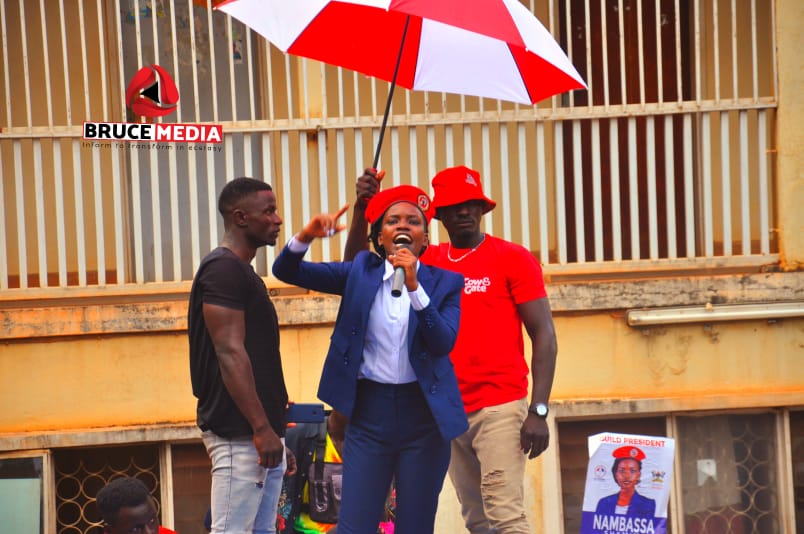 The Forum for Democratic Change Party which postures as opposition has made an alliance with the Uganda Police Force to sabotage the political activities of the Makerere University Guild Candidate of the National Unity Platform Party.

Shamim Nambasa who is holding the NUP party ticket is facing a rough time to wade through the barriers set by the university administration and the police. On Tuesday evening she had to lead a procession to the neighboring communities in Kikoni, Kikumi Kikumi and Wandegeya but this had to be intercepted by the police which was on standby. Wherever Nambasa and her entourage would try to go, the police under the command of ASP Mutumba would swing into action and disperse her procession. Surprisingly, this brutality was not meted out on Obeid Kamulegeya Yahaya the FDC Makerere flag bearer. Sources say, the FDC flag bearer is having the goodwill of the university administration and the state. In fact, his campaign funds are said to be channeled from the regime operatives who have pitched camp at the university premises. The ISO is heavily interested in frustrating the NUP candidate from winning the 87th guild elections. Some regime operatives at a high profile meeting held at the University guest house were overheard saying they would not allow ‘Bobi Wine to get another victory at Makerere’. This was reached after two of the preceding Guild Presidents were all People Power leaning and loyal to Hon. Kyagulanyi Ssentamu Robert.

The newly launched People’s Front for Transition is also interested in teaching the National Unity Platform Party a lesson by winning the Makerere polls. In fact, credible sources intimate that Najjanankumbi officials led by Eng. Patrick Amuriat Oboi and Dr. Kizza Besigye have broken the bank to ensure that their candidate Obeid wins the contest. Obeid Kamulegeya Yahaya is said to be a descendant of prominent muslim sheikh Obeid Kamulegeya. Sources inside the FDC say even the party headquarters at Najjanankumbi are housed on the land of Sheikh Kamulegeya which is why the party feels obliged to fight for the victory of his grandson at Makerere. With two days left to the polls, the NUP party candidate Shamim Nambasa is said to be in a comfortable lead as students have already vowed to shower her with votes.