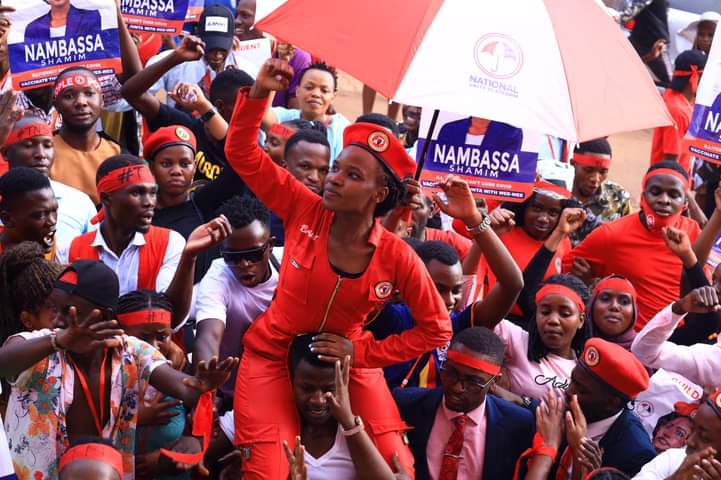 Being a Guild president of a premier institution like Makerere has never been an easy walk for the girl child. In fact, out of the 87 guild leaders this institution has had, only 5 are females with the first having been Gertrude Njuba in 1987.

When the 87th guild race had just began, Nambassa Shamim had been perceived to be an underdog despite holding the National Unity Platform party flag. Many had already stereotyped that by the virtue of her being a woman, she would not achieve much from her efforts. However, she beat all odds and massively trounced her would be competitor Obeid Kamulegeya who held the FDC ticket. Our reporter brings you the unknown about this 23 year old student that wrote history by being a female guild at a time when the University marks 100 years of existence.

Beginning her political career as a head girl at Nabisunsa girls’s school in her A level, Nambassa never imagined that at some point she would be amongst the lucky 5 females to lead the Ivory Tower.

At University, she kick started leadership by running for GRC health sciences a docket from which she was scooped for a cabinet appointment as minister of Academic Affairs in the preceding 86th. It is from this Ministry that she based to warm up for the top most seat of guild president.

Nambasa Shamim the 23 year old is a born of Kamuli -Nkwizi village in Kanyangeya parish in Kasese district in Rwenzori subregion. She is pursuing a Bachelor’s degree in pharmacy and apparently in her third academic year. She went to Parental Care Primary School in Kasese for her Primary Leaving Examinations where she excelled and joined the renowned traditional school dubbed Nabisunsa Sirls for both O and A level. It’s from here that she joined Makerere university. She believes that illiteracy cannot cure covid and hence her slogan ‘vaccinate the junta.’
For the years she has been at Makerere university she strongly believed that once she becomes the 87th guild elect she could work on the following issues;

1. To work on health services
2. To have the controversial 15% tuition policy phased out completely
3. To make Makerere university okay.
4.To work on the renovation of halls of resistance.