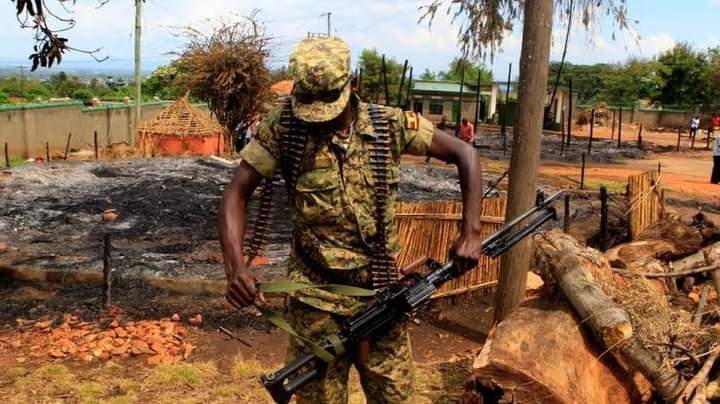 The NUP leader Kyagulanyi  Ssentamu Robert aka Bobi Wine has in a statement decried the unaccounted killings of the subjects of Rwenzururu kingdom. According to Wine, it is utterly unacceptable for the lost lives to remain unaccounted for. In a statement, he criticizes the manner in which the Kasese issue was handled;

5 years later, the subjects of Rwenzururu Kingdom in Kasese region still await justice after a scorched-earth military attack on their palace and surrounding areas left at least 153 unarmed civilians dead on Dictator Museveni’s orders. On 26th and 27th November 2016, Gen. Peter Elwelu led hundreds of UPDF soldiers and war tanks that raided the Kingdom and besieged its Palace without allowing anybody to get in or get out. The military then commenced a bombing and shooting operation that spared neither children, women, the elderly, nor livestock in alleged pursuit of ‘terrorists’ that had destabilised the region unstable.

By the time the guns fell silent, the palace had been reduced to rubble. King Charles Wesley Mumbere who miraculously survived the attack was literally grabbed by the belt and dragged out of his burnt palace to Kasese Central Police Station. Eventually, he and 159 other survivors of the attack bearing horrifying wounds were arraigned in Court and charged with crimes including murder, treason, and terrorism. For those who have spent some time under dictator Museveni’s regime, this is an all-too-familiar script in which survivors of large-scale atrocities committed on his orders are charged with capital offences so as to muzzle their quest for justice and blur public conversation about the atrocity itself.

To date, King Mumbere remains a hostage in Kampala. The regime went as far as defying a Court order issued to allow him attend the burial of his late mother Christine Biira Mukirania who died in June 2020. Some of the King’s co-accused victims of the attack have since passed on in prison, and many others were forced to confess to the crimes in exchange for ‘amnesty’. Meanwhile, the terrorist who led this attack — Gen. Elwelu — keeps earning promotion after another, and is now even representing the military in Parliament.

The State continues to persecute residents perceived to be loyal to King Mumbere in Rwenzori region. This is in addition to cracking down on opposition activities and supporters. Early this month, the NUP Kasese District leadership team led by its Chairperson Mr. Basisa Brian was arrested during a Party meeting. They were then charged with treason, and remanded to Katwe Prison in the sane district.

Justice may be taking long to be done for the people of Kasese, but rest assured that one day, those who mutilated and humiliated your loved ones in November 2016 will be held accountable for their crimes. #KaseseMassacre #WeAreRemovingaDictator