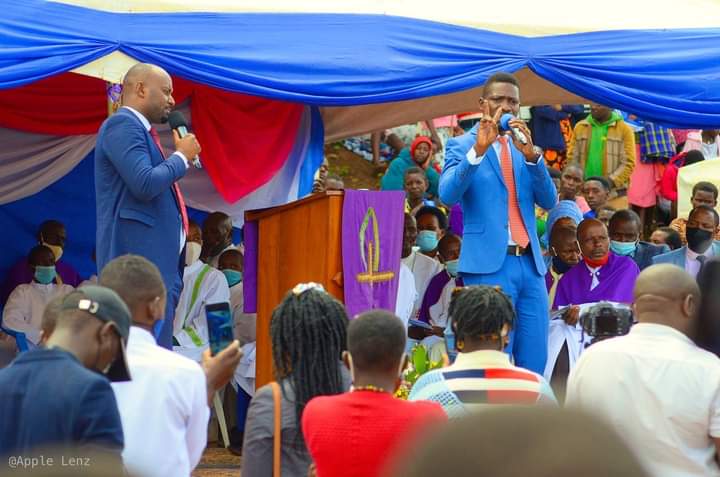 The weekend has been eventful for the National Unity Platform party president Kyagulanyi Ssentamu Robert aka Bobi Wine as he was embroiled in a ‘meet and greet’ drive with his supporters in the Kigezi subregion.

Wine was accompanied by the party secretary general David Lewis Rubongoya and several leaders in the NUP party.

As expected, the police could not let him have a smooth ride. They did all possible to bar him from conducting his drive freely. He however braved all this and met his supporters as he narrated in a social media statement below;

Today, we beat several roadblocks to make it to Rukiga district in Kigezi Sub-region in order to attend mass at St. Luke Muhanga Catholic Church. The mass which attracted pilgrims from several districts in Western Uganda was organised to celebrate the opening and blessing of a new chapel named after Mother Mary.

For the past few days after we indicated interest in attending the mass, the authorities in the area put the leadership of the Church under immense pressure to cancel our participation, but the area Church leaders stood their ground and insisted that there is no law which bars me or anyone else from attending mass. I am eternally grateful to them for their courage amidst the intimidation.

In my communication to the people of God, I thanked them for such a warm reception and explained to them that our message is not divisive but unifying. I explained that our struggle is about human rights, better education, better health care, good roads, markets for our produce, etc. We were very moved by the talent and passion of the choir and we shall be supporting it.