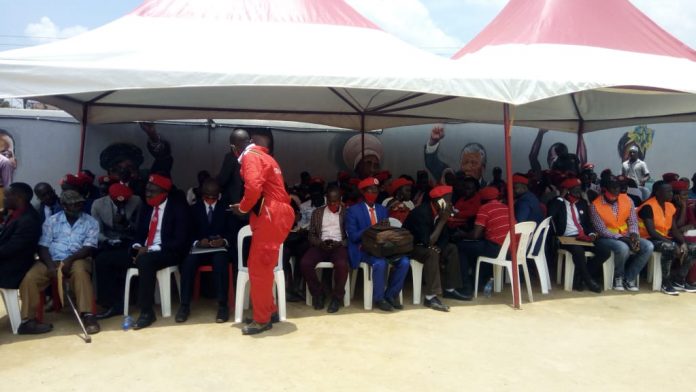 Mbaju led a delegation of FDC Kasese district leaders to the NUP head offices in Kamwokya where they all switched allegiance to NUP.

The leaders were inspired by the reluctant way the FDC has handled the Kasese massacre issue as they stress that the Najjanankumbi group seems to have moved on. Mbaju says the people of Kasese were impressed by how NUP has handled the Rwenzururu issue.

While addressing the congregants, NUP Spokesperson Joel  Ssenyonyi appealed to the security agencies to come to parliament and apprehend Maj. Gen. Peter Elwelu whom he says is one of the terror suspects who should be in jail.

Ssenyonyi says Elwelu is one of the perpetrators of terror who must be languishing in incarceration other than occupy elective offices.

“It’s absurd that we are sitting with a criminal in parliament,” Ssenyonyi cried out. “After killing innocent people, Elwelu was even promoted in ranks and he now represents the army in parliament,” he added.

Mbaju is the former Busongora North MP under the FDC ticket.

He led a delegation of FDC leaders who preferred to join NUP which they say is a visionary party.

“A moment of silence for all our people who were murdered. May their souls rest in eternal peace,” she said.

Mbaju commended the FDC leaders for making a well informed decision. “I’ve not just come with ordinary FDC people but these are leaders in the struggle for good governance. We are here not to just join NUP but to make a statement,” Mbaju exclaimed. “We are going to mobilize for NUP because it is a party that knows the grassroot person,” he added.