Byekwaso: we don’t need parliament support to invade another territory 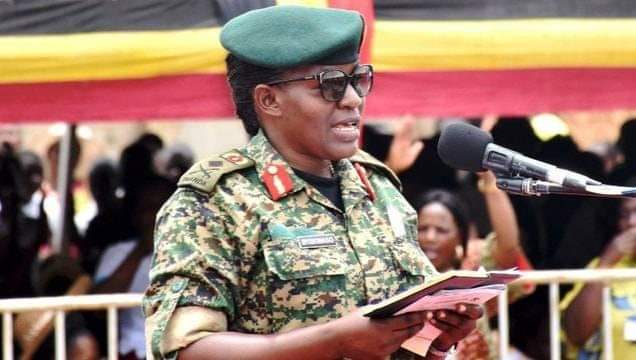 The spokesperson for the Uganda People’s Defence Forces Brig. Flavia Byekwaso has come out to defend the ongoing offensive in the Eastern Congo saying the army is at liberty to conduct an operation without having the mandate of the parliament.

Byekwaso was reacting to an outburst raised by opposition legislators from NUP who were heavily contentious on the UPDF presence in DRC.

Byekwaso explains that the UPDF act of 2005 warrants the army to deploy in times of urgency without any parliamentary consent. She has since lashed out at NUP MPs like Zaake whom she says are not informed in matters of security.

“You see they just shout out of excitement. They don’t know why we do things our way,” asserted Byekwaso. “Zaake is an excited yount fella witu no knowledge in security matters,” she added.

Byekwaso reiterates that the UPDF according to its act of 2005 is at liberty to “first conduct an offensive while the parliament approval is pending.”

Today in Parliament, I questioned the Regime’s deployment of UPDF troops in DR Congo without Parliamentary approval, contrary to our Constitution and the UPDF Act of 2005. This was after UPDF’s Spokesperson confirmed in the morning that Uganda’s military had “launched air and artillery strikes against ADF camps” in D. R. Congo.

As we may recall, in the 1990s when UPDF soldiers fought in DRC, their commanders plundered Congo’s natural resources and Uganda was eventually ordered by the International Court of Justice to pay UGX 10 trillion in reparations — money that we are yet to pay. We therefore stand to lose even more in terms of life and resources for engaging in wars which may have been prevented or guided through Parliamentary oversight.

In response to my concern, the Speaker has directed Government to make a formal statement about this deployment. #WeAreRemovingaDictator