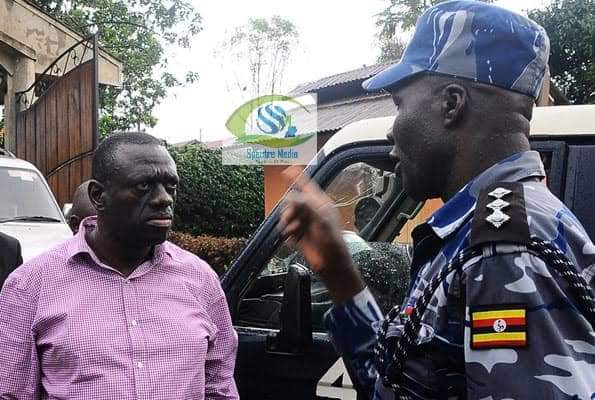 Renowned opposition tormentor Afande Sam Omala now retired who rose to fame during Kizza Besigye ‘s ‘walk to work Campaign’ by oftenly arresting him has come to say that he feels heart broken for never being appreciated for his efforts to save this govt that was going collapse.

A teary Omala while appearing on one of the media station, said if he it wasn’t him and gallant workholics like the late AIGP Felix Kaweesa, this government would have been history by today.

“The Uganda Police was very disjointed at the time, enemies of the National Resistance Movement (NRM) were so many at the time, and if we did not stand on our two legs to say “NO”, this government would have collapsed at that time,” Omala said

Omala said that the passion and dedication he put into his job was worth “political delightment ”but he has not been remembered.

Omala recalls when he had to spend 7 days in the cold outside Besigye’s gate to prevent him from going to the city to cause chaos but all the praises and applauds could go to his bosses especially Gen Kayihura.

“I was a real fighter, but they did not remember any of my efforts. I used to work, but the credit would always go to my bosses. I slept at Besigye’s gate for seven days during ‘Walk to Work’ protests but none of that was remembered.”

Omala added that his job in the Uganda Police was a “job beyond salary” with a lot of challenges where he could easily be tempted to be compromised and take a bribe but be didn’t because he thought he was serving a regime that would appreciate him.

Omala also recalled a time when opposition politicians tried to bribe him with shs 200 million to leave the ‘Walk to Work’ protests, but he reported them to his boss Kale Kayihura who was the IGP at the time.

“I told Kayihura about these people, he did not give me a conclusive answer, and when I realised that he was still not decisive, I said “NO” to this offer and made it difficult for them. I continued with my work,” Omala said.

Sam Omala during walk to work protests
Omala said that may be things would have been different if Kayihura had told President Museveni about this incident.

He said, “Maybe he did not want to build my name, police officers were known to be corrupt but I said no to shs 200 million, I believe the president would have gratified me, I blame Kayihura.”

Omala,61 now retired, said that he is engaged in his private businesses and he is proud of the service he rendered to this country during his time in police.